WRITTEN BY THE MOM NEWS TEAM 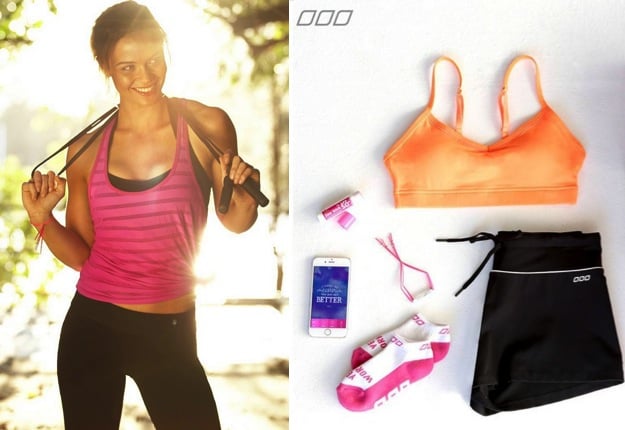 It’s been a busy week for fitness brand Lorna Jane … but not in a good way.

In fact we’re pretty sure the entire management would have had their heart rate up in the ‘fat burning zone’ all week.  Not of course that anyone that actually works there would need to burn any fat!

The first blow this week came when Amy Robinson, a former Lorna Jane Store Manager at the Brisbane Airport DFO store, launched a $500,000 law suit against the brand to compensate for the pain and suffering she endured whilst working there.

Amy Robinson was a young mum, size 14.  Very normal by Australian standards.  She felt though that she clearly didn’t fit the brand’s ‘look’.  Everyday she claims she was subjected to bullying and fat-shaming.  And that rather than embracing the MOVE. NOURISH. BELIEVE. (which we would think means that everyone of any size can move, nourish their bodies and believe in themselves) company tagline, it was allegedly implied that she should skip lunch and just drink coffee like a lot of the other employees.

In addition to her claims of being bullied over her ‘weight and size’, she also claims that the store in which she worked (apparently the Brisbane Airport DFO store is one of their busiest) was always understaffed and because of this she was forced to lift up to 100 boxes of clothing, weighing up to 20kg each day. Amy has since had two surgeries for internal injuries she is maintaining was directly linked to lifting boxes.

This story has gone mad over the last two days. It’s everywhere because it appears to have struck a chord with so many people.

Blow No. 2
With what seems to be highly coincidental timing, Lorna Jane then launched a hashtag this week #tellthetruth
They went out with the hashtag in an attempt to gain support via their Facebook fans.  This failed big time with many of their fans commenting calling the business a ‘bully’.  It clearly got out of hand and wasn’t achieving what the brand had set out to do, so the post was deleted.
A follow up message was then posted on the Lorna Jane facebook page: 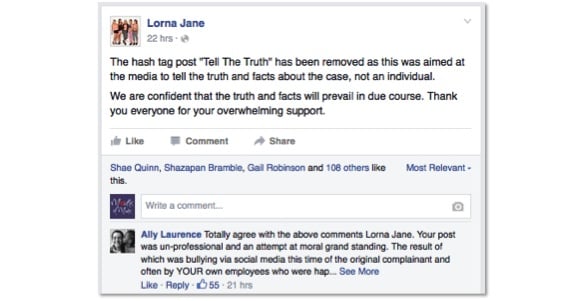 The hash tag post “Tell The Truth” has been removed as this was aimed at the media to tell the truth and facts about the case, not an individual. We are confident that the truth and facts will prevail in due course. Thank you everyone for your overwhelming support.

A Sydney mum makes a decision to change a few things in her life; she decides to start exercising so purchases a treadmill to use at home.  You go girl!
When the treadmill arrives, so too does a $250 voucher for Lorna Jane.  A great match one would think – yup some groovy new exercise gear for when you’re … exercising!
The problem for this mum though is that no matter whether she looked in store or online, the fitness giant (remember they want you to MOVE. NOURISH. BELIEVE) didn’t have one piece of clothing in a size 18.
We checked the online store and found that some lines were carried in XL but nowhere could we find exactly what size this equated to.  We did laugh out loud though when we chose XL as our shopping filter and were presented with models that looked to be size 6 – 8. 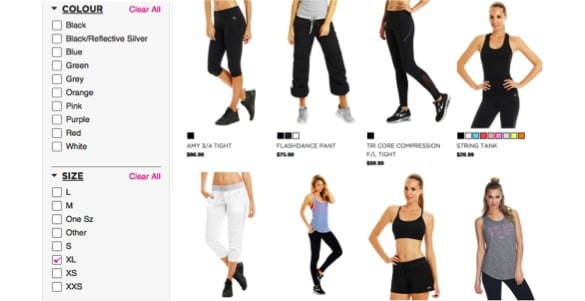 So you can imagine that the Sydney mum, complete with her $250 to spend became massively dilusioned when the only things that applied to her were ‘miscellaneous’, ‘accessories’. Understandably she was left in tears after not being able to find a single piece of exercise clothing. She ended up buying “a yoga mat, a bag of socks and a headband”.
Take a look at the LJ size chart and you’ll see why this mum struggled finding anything.  XL to Lorna Jane is a size 16 and that’s as far as it goes. 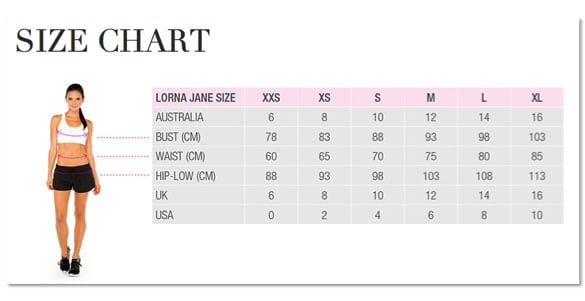 God bless her husband who felt her pain and decided to do something about it.  He took to his own facebook page and lashed out at the brand.  he demanded to know whey Lorna Jane only stocked ‘teeny tiny sizes’. A very good question.

In just 15 hours more than 50,000 people have liked the post to show their support for his wife, Hayley Marsden, who was left in tears when she was unable to find anything in her size at a Lorna Jane store. She was trying to buy new clothes to motivate her for her new fitness regime.

Hi there, Lorna Jane… Why are you not catering for your target market- overweight people who want to lose weight?

This written by her husband Ryan Marsden in his impassioned post.

Why do you stock only teeny tiny sizes? Do you not want your clothing to be seen on ‘fat’ people?

So 3 strikes Lorna Jane. Does that mean you’re OUT?

Well probably not. Not this year or next but perhaps the wheels are in motion for consumers to start questioning where they shop.

We’re betting Lorna Jane is glad this week is over. Trouble is, none of this stuff will go away anytime soon.

We consumers have long, long memories and it’s up to retailers to make us feel great about ourselves, not defeated before we start.

Have you ever felt defeated when you tried to spend your cash?