The dangers lurking in your tots bath toys.

Last year we shared a post from pediatric dentist, Dana Chianese, who often recommends teething toys to parents, including Sophie the Giraffe but not anymore.

The mum decided to clean the toy when she noticed the air coming out of the hole smelled musty. “I decided to cut into Sophie out of curiosity and discovered a science experiment living inside,” Dana told Goodhousekeeping.com. 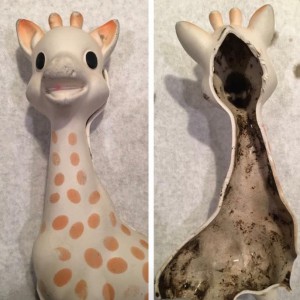 Dana said she always cleaned the toy according to instructions, using hot, soapy water with a damp sponge and never submerging it into water.

“It still hurts my heart to know that for months I allowed my babies to chew on mouldy toys,” she says. “I no longer buy any chew toys with a hole or recommend any to my patients.”

Another mum also tried to alert parents to what she found when she cut the legs off of her child’s teething toy and even shared a picture for proof: “Beware!! If you have a drooly baby, moisture will get in the hole and you’ll end up with mould!” says Amazon user Stephanie Opera.

“We’ve had ours for two years and the entire inside is coated with black mould!” 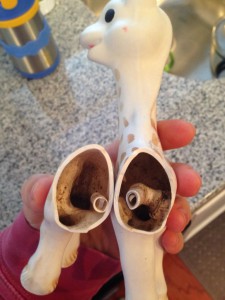 The best way to clean washable plastic toys is in hot soapy water or in the dishwasher. Then, disinfect them with a solution of 1/2 cup bleach per litre of water. Soak them for five minutes, rinse and air dry.

Exposure to mould in toys is usually not something to be too alarmed about, unless your child has a immune disorder.

However, if your child does have a mould allergy, they may start experiencing symptoms such as coughing or itchy eyes.

The company did remind parents that the teethers shouldn’t be submerged in water. 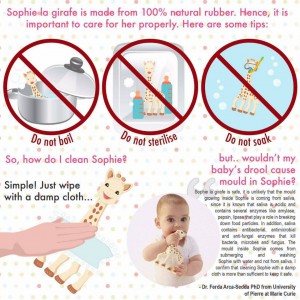 In October last year, a dad cut open another bath toy to remind parents how often they should be tossing them aside and replacing them.

He cuts open a bath toy to show people how disgusting the black mould is inside the toy.

Dad, Jack Toepfer, posted a video warning on Youtube, to highlight the hidden grime that can be found in your kids’ old bath toys.

“Any toys that hold water, that squirt water, or otherwise do not dry completely in an hour or so – throw them out,” he wrote alongside the video.

“All of this mould came out of this toy AFTER some had already squirted out in the bath,” he continued.

“There is no way for these squeeze toys to dry completely so they sit, with water in them, in dark moist places – and it is mould paradise.”

“Your kids chew on these, drink out of them, and otherwise trust that they are clean because they are in a soapy bath, after all,” he said.

“If your kids insist on using them, throw them out after the first bath. They are cheap and there are better bath toys out there.”

The latest news on bath toys comes after Swiss and American researchers counted the microbes swimming inside the toys and said the murky liquid released when ducks were squeezed contained “potentially pathogenic bacteria” in four out of the five toys studied.

The bacteria found included legionella, which can cause respiratory illnesses such as legionnaire’s disease and pseudomonas aeruginosa, a bacterium “often implicated in hospital-acquired infections”.

The scientists found a strikingly high volume — up to 75 million cells per square centimetre — and variety of bacteria and fungus living inside the ducks.

The study by the Swiss Federal Institute of Aquatic Science and Technology, ETH Zurich and the University of Illinois was published in the journal Biofilms and Microbiomes.

Parents should change them over frequently

Toss them out and replace regularly, you can usually get cheap ones at discount stores to keep on rotation.

Although many parents who aren’t keen to dispose of such waste recommend a good clean with Milton steriliser or a rinse in the dish washer on a regular basis.

Another clever tip is to use a glue gun to seal the hole before putting them in the bath.