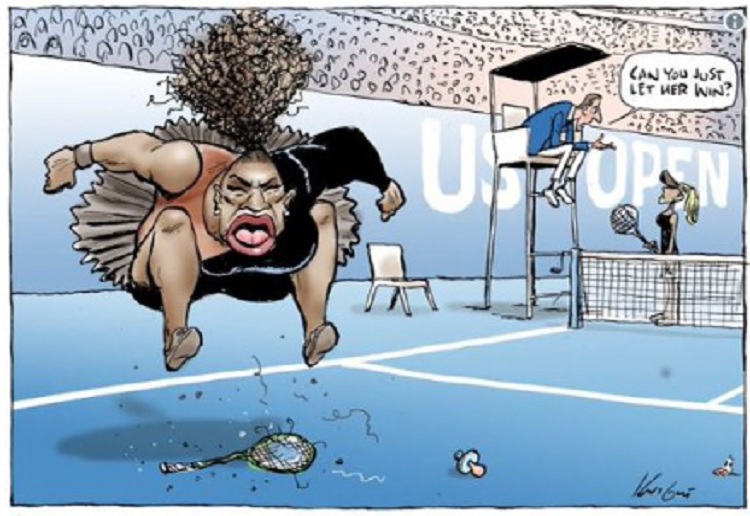 Veteran cartoonist Mark Knight has rejected suggestions his depiction of Serena Williams is “racist”, saying those condemning him are “making stuff up”.

The cartoon, published in the Herald Sun, was Mr Knight’s take on the controversial US Open final, which Ms Williams lost to Japan’s Naomi Osaka after being given three penalty points — one for coaching, one for breaking her racquet and another for verbal abuse of the chair umpire.

Ms Williams’ behaviour has divided onlookers, with some saying she was out of line and others believing she was the victim of overzealous or discriminatory officiating.

Mr Knight’s cartoon shows Williams stamping on her racquet with a dummy on the ground and the umpire telling Osaka, “Can you just let her win?”.

Mr Knight said his cartoon was only about Williams’ behaviour on the court and said those suggesting it was racist or sexist were misinterpreting it. “I saw the world number one tennis player have a huge hissy fit and spit the dummy.

That’s what the cartoon was about, her poor behaviour on the court,” he said.

“So, this whole business that I’m some sort of racist, calling on racial cartoons from the past, it’s just made up. It’s not there.”

“I find on social media that stuff gets shared around, and it’s like a sort of rolling thunder. It’s like a hurricane. It develops intensity way beyond its initial meaning,” he said.

“I think racial tensions in America are, of course, more heightened than here in Australia. And Americans may look at it in a different light. “No racial historical significance should be read into it.”

Well done on reducing one of the greatest sportswomen alive to racist and sexist tropes and turning a second great sportswoman into a faceless prop. https://t.co/YOxVMuTXEC

This small boy doesn’t realise he’s drawn a cartoon that will be studied and shown for generations after Serena retires for encapsulating the hostile misogynoir she endured from an insecure white gaze uncomfortable with her greatness. Even his erasure of Naomi Osaka is perfect. https://t.co/xgDFrURx3B

Holy crap. This Serena cartoon is racist AF & reminiscent Jack Johnson cartoons in 1910. Mark Knight should be fired. But any Herald Sun editors that would allow this, should fire themselves first. https://t.co/Usgd7pWH8b

Whatever you think of the Serena Williams situation, I think we can all agree that this cartoon is disgusting. Erasing Naomi Osaka’s blackness alongside a grossly racialised caricature of Serena, invoking racist stereotypes, is obscene. https://t.co/Z09T7rt5tt

Criticism of Mark Knight’s Serena Williams cartoon shows the world has gone too PC & misunderstands the role of news media cartoons and satire. Poor behaviour in any sport needs to be called out. #media #cartoons #markknight @Knightcartoons @theheraldsun https://t.co/KQFuvIJp0Q pic.twitter.com/sRo3AQ1cJW

Let’s be real about this cartoon from an Australian male. He’s placed emphasis on making Serena larger, uglier and brutish. Osako on the other hand, Anglo, slim and attractive. Don’t tell me this isn’t anything but racist and sexist. pic.twitter.com/JawauD8hyI

The @theheraldsun has backed @Knightcartoons‘s cartoon of @serenawilliams, saying: “It had nothing to do with gender or race.” https://t.co/IvQwo8VKLV

Do you think it has racist undertones?