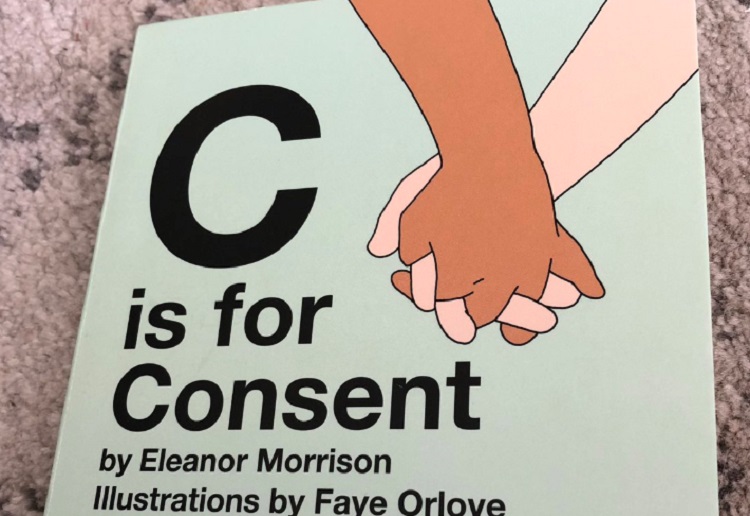 A picture book designed to teach children about consent has sparked a debate online.

‘C is for Consent’, by American author Eleanor Morrison, offers lessons on ‘how to offer affection’ and encourages mothers and fathers not to ‘force hugs and kisses’.

It divided opinion after New York-based writer Zoe Samudzi tweeted this week that she is reading the title to her 11-month-old nephew, saying she was ‘starting him early’.

While some parents agreed children were never too young to learn about consent, others argued it was inappropriate content for a children’s book.

The book, which was released in April following a crowdfunding campaign, is designed for children aged 0 – 3+.

The book, which follows a character called Finn, the name of author Eleanor’s son, ends with the lesson that he should ask for consent before holding his female friend’s hand.

‘By including active parent characters, this book familiarizes parent readers with setting boundaries when grandparents or friends demand hugs from the child or try to plant kisses without asking’, Eleanor said.

Describing the book as aimed at ages 0-3+, she explained that it can be used as role play, adding: ‘The lesson will not be absorbed by a months-old baby, but toddlers will start understanding, and parents like me want to set the groundwork for future conversations’.

She explained she would respect her nephew’s ‘autonomy’ by never ‘making him hug me’, adding: ‘His learning to assert his autonomy and to respect the autonomy of others is a lot more important than my feelings’.

Critics claimed the content ‘sexualised’ children, with one writing: ‘ Children at that age is too early. Teaching them ‘consent’ I know it not all about sex. But please. ‘This things will only go out hand. Even in secondary school, I recall the cringes it gives been thought about the private parts. Let alone kids (sic).’

However dozens of followers agreed with Zoe, arguing consent does not just apply to sex.

What do you think? Too young?