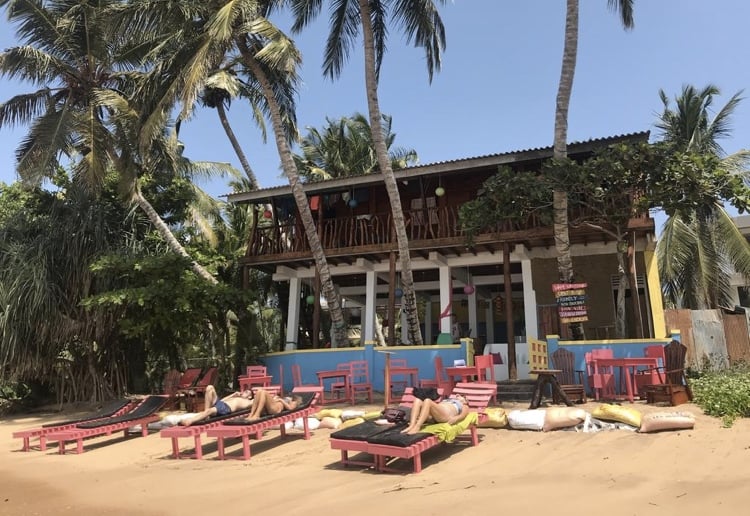 It’s not very often that you go on a romantic honeymoon and come back as the owners of a hotel.

This is exactly what happened to Gina Lyons and Mark Lee, from London, who went off on a post-wedding adventure backpacking adventure around Sri Lanka last December.

The newlyweds have shared that they got so intoxicated one night that they agreed to buy a hotel.

The couple fell in love with the charming rustic hotel on the beach, that they were staying at. So when they heard that the hotel’s lease was coming up for renewal, it only took 12 glasses of rum to convince the couple that they would be perfect to take it over, at a cost of a meager 30,000 quid.

So, a drunken impulsive decision has been life-changing with Gina and Mark, officially taking ownership of the hotel as of 1 July this year. They have renamed it ‘Lucky Beach Tangalle’.

‘When we walked into the hotel we saw a group of old Sri Lankan men who were still drunk from the night before, so we started drinking with them, Gina explains.

‘The hotel looked grotty and very cheap, but it was by the beach and had the “wooden tree house” feel that we like.

‘When we were on the beach drinking rum, we were told that the lease was almost up for the hotel.

‘After finding out that it was £10,000 a year, myself and Mark thought that it would be a brilliant idea to buy it – because we were so drunk.

‘Now, almost a year on from our drunken idea, we own the hotel and have started doing the hotel up and making it ours.’

Gina continues: ‘The next day we went and met an old couple who we had to speak to about renewing the lease ourselves.

‘We had to take two friends we had made with us so they could translate for us, as the couple didn’t speak English themselves.

‘Because we didn’t understand most of the conversation, Mark and I were just sat drinking more rum and slowly getting drunk again.

A Baby On The Way

The couple managed to scrape together enough cash to pay the first half of the leases. However, three months later, Gina discovered that she was expecting a baby.

‘I felt like I was already a bad mother because I felt guilty that I’d wasted all of this money buying a business that might not work.

‘Even our friends and family think we’re idiots and shouldn’t have been doing it – we owed a lot of money from the wedding and only lived in a tiny flat, and now we had a baby on the way.

‘I was plagued with feeling irresponsible, but it was either sink or swim – so we decided we’d have to make it work.

‘That’s when we decided to throw our all into it, both for ourselves and for the baby, and in July we officially became owners of the business.’

Despite all doubts, the couple opened their seven-bedroom B&B at the end of July and have had a steady flow of customers since.

We may have to make a spontaneous trip to Sri Lank to check it out.