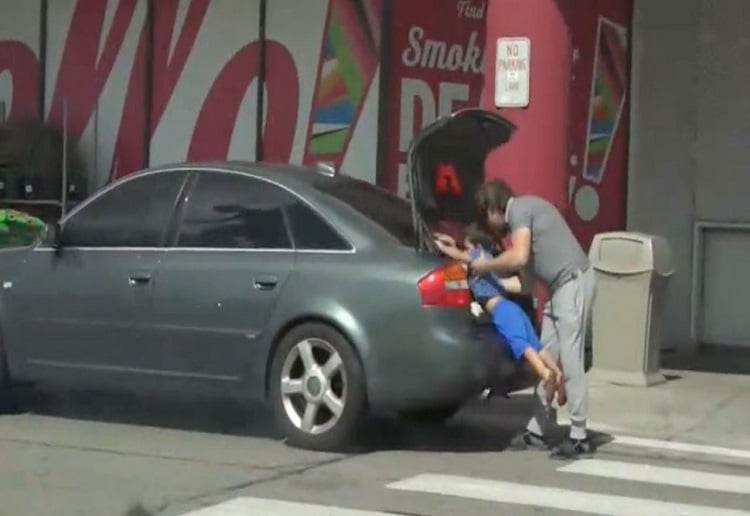 A father has been arrested after he allegedly put his three-year-old son into the boot of his car as a social experiment.

Boguslaw Matlak, 28, and the boy’s mother, Laura Quijano, have since lost temporary custody of the child following the September 2 incident in Norridge, Illinois, the Chicago Tribune reports.

Matlak claims he appeared to lock his toddler in the trunk of his Audi — insisting that the back seat was lowered so that the boy could crawl out — as a social experiment to see if bystanders would intervene for a display of bad parenting, shares Yahoo 7.

The purpose of the alleged experiment, he maintains, was “just to send awareness to other people to get involved. When people see something wrong, they won’t get involved. And when it comes down to kids, it’s everybody’s business to get involved.”

Matlak said he was inspired to stage the scene after he observed a couple exposing a child to second-hand smoke in a parked car.

While it’s unclear if he intervened in that situation, the three women who later saw him put his son in the trunk in the car park didn’t hesitate to call police.

The witnesses told authorities that it was a hot day — 31C— and that Matlak had told his son that he was going into the trunk as punishment.

Though Matlak later left the scene with the child and his mother, he returned to the car park and was arrested. Following further investigation, police noted that the boy “appeared fine and unharmed”.

According to Matlak, the “experiment” was filmed and had been acted out a few times — with no consequence other than a security guard being called — before the latest demonstration.

Ms Quijano and a friend, Nicholas Johnson, have backed up his claims.

“We expected people to understand what we did, but there was the police and then the arrest,” Johnson told the paper.

Matlak is due in court on September 28 regarding the child endangerment charge, and the Department of Children and Family Services has launched an ongoing investigation.