Article How This Couple Both Carried the Same Baby 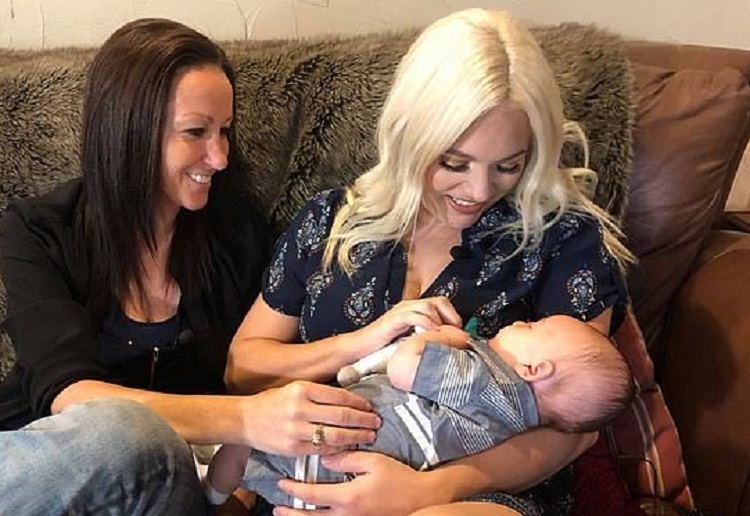 A same-sex couple is believed to have made medical history after they both carried the same baby.

The procedure, which allowed them both to be involved in bringing their child into the world, is reported to be half the cost of traditional IVF.

Eggs were taken from Bliss, 36, and fertilized with donor sperm in the lab, reports Daily Mail.

The embryo was then placed inside Bliss, who acted as an incubator for the first five days, using a plastic device that resembles a champagne cork.

Bliss did not want to carry a child, so the embryo was then removed and placed in 28-year-old Ashleigh.

In June this year, their ‘perfect’ son Stetson was born healthy at 8lbs 4oz.

Although they both hoped to one day have children, Bliss wanted a baby that was biologically hers but did not want to be pregnant.

Same-sex female couples usually have children via a sperm donor with one woman carrying the baby and the other adopting it.

However, both Bliss and Ashleigh wanted to be involved.

The device, made entirely of plastic, is then placed in a woman’s vagina, which keeps the embryo warm and removes toxins, like harmful gasses.

In traditional IVF, the embryo is incubated in a laboratory before it is transferred to the woman’s uterus.

Usually, Effortless Reciprocal IVF involves the same woman donating her eggs and then carrying the embryo.

Because the egg and embryo came from Bliss and were then put in Ashleigh, this is a unique medical case. Dr Doody believes it is the first of its kind.

She told MailOnline: ‘What makes this so special is that it’s the first time that two women have actually carried the pregnancy of their child together.

‘Each person played an active role in the pregnancy aspect of their baby, which is different than normal or traditional IVF.’

Dr Doody revealed Ashleigh and Bliss were the first, but not the only, couple that have carried the same baby using Effortless Reciprocal IVF.

She said another unidentified couple in their thirties had given birth to a ‘healthy baby girl a few weeks ago’ after undergoing the procedure.