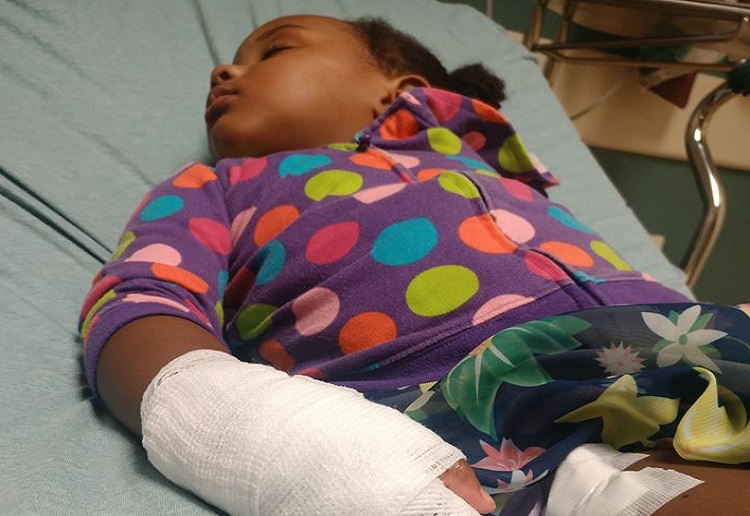 A toddler has ben treated for second-degree burns after she was badly burned by a slice of piping hot pizza.

Koddi and Wade Dunn of Georgia, in the US, were driving home from a visit to grandma’s when they decided to stop for pizza.

The family placed a drive-through order for a Hot-N-Ready pepperoni pizza, which is cooked at a temperature of 550 degrees, according to a 2013 post on the company’s Facebook page.

When they received their food mum passed the box to her sons in the back seat, warning them to be careful, reports Yahoo news.

However, when one of the boys lifted a slice, a glob of piping-hot sauce and cheese fell on his two year old sister, Jordyn, who was sitting next to him in her car seat.

She dove into the back seat while her husband pulled over to the side of the road.

Seeing the skin on Jordyn’s hand blistering from the heat, they immediately drove to Gwinnett Medical Centre, where she was treated for second-degree burns. 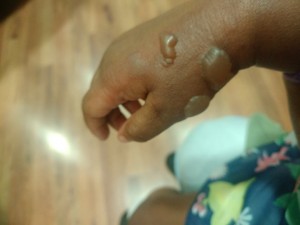 Ms Dunn called the restaurant and said she was told that after Hot-N-Ready pizzas are removed from the oven, they’re placed in 160-degree warmers.

“But the employee said they were ‘really backed up’ that night, so customers were handed pizza straight from the oven,” she said.

Ms Dunn says a simple warning from the employee could have prevented her daughter’s injuries.

Ms Dunn says that a manager left her a voicemail on Monday night.

“There was no apology or compassion for what happened to my daughter — my family is traumatised,” she says.

Koddi’s warning on Facebook has been shared nearly 6000 times.