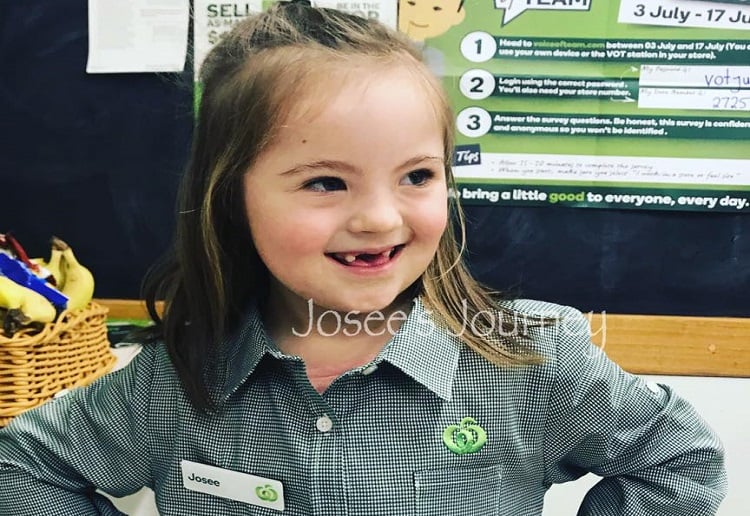 Little Josee Kelly was thrilled when her mum threw her a Woolworths-themed birthday party in January.

The five year old Queensland girl, who has Down Syndrome, always loved everything about grocery shopping with her mother so when she asked for a Woolworths themed party, it didn’t come as a surprise.

What did come as a surprise, however, was the heartwarming Christmas letter and personalised name tag that Josee recently received in the mail.

The letter was sent by the company’s Queensland State General Manager who told Josee that he looked forward to welcoming her to the team when she turned 14 and nine months.

‘I love your passion and energy,’ he wrote, encouraging her to ‘aim high and believe you can do anything’.

‘In the meantime I have organised this pass which gets you to visit me in the support office if you ever are in Brisbane.’

Mrs Kelly shared photos of her thrilled little girl on Facebook, accompanied by photos of the letter and name tag.

‘Josee and Matt first met a few weeks ago and had afternoon tea together. Since then every time we visit our local Woolies she is sure the Meat department sign says “Matt” and not “Meat”,’ the proud mother wrote.

‘Not many top business people would take the time out to write to a little girl from a tiny little town in their home state. We really appreciate the time and effort Matt and all the team from Woolworths place in to our girl.

‘It takes a village to raise a child, and we are so blessed our village included top notch people!’

Mrs Kelly, who runs the page Josee’s Journey of Faith Hope & Love and is the founder of the T21 Mum Australia Network, has always been conscious of raising Josee with the long term goal of being as independent as possible and shopping is a big part of that.

‘Together her and I have created little routines when we shop, and in turn she really enjoys shopping and is a delight to shop with,’ Mrs Kelly told FEMAIL.

‘We have a set routine when we go to Woolies where she enters the store by saying “Roll up, roll up welcome to Woolworths!” (I have no idea where that came from) and then she chooses a basket.

‘We take a list and we talk about what we are buying and she asks what’s next on the list.’

Mrs Kelly said Josee has learned where the fruit and vegetable section is, the numbers of the aisles and where to find some of her favourite foods so she loves to help out.

‘We always have to take the self serve checkout so she can get all the items out and hand them to me to scan. She even knew my PIN for a while so I had to change it for fear of her announcing it loudly to everyone,’ Mrs Kelly said.

The whole process finishes with a high five for a job well done and she is always complimented for her manners and helpfulness.

Before she started planning the party in January, she showed Josee photos of what a party was and explained that she could pick a theme.

‘I showed her unicorns, fairies, Frozen and rainbows – all things she loved. When I said what do you want… she said “Woolworths”, so it all began!’

‘Her party bags were Woolies bags, the tables were covered in Woolworths signs from the shop, her cake topper was made by her sister in the shape of a Woolworths symbol, and a lady contacted us to donate a shirt for her, via Josee’s Facebook page.

‘When we were buying things at Woolworths for the party Josee told an employee in her own little language that she was having a Woolies party. After I explained it to him he said we needed to tell the manager so we did!

‘Josee was presented with some bunches of roses and the smile on her face was so beautiful as she walked out of the shop.’

Check out the KMART party this young girl had – HERE