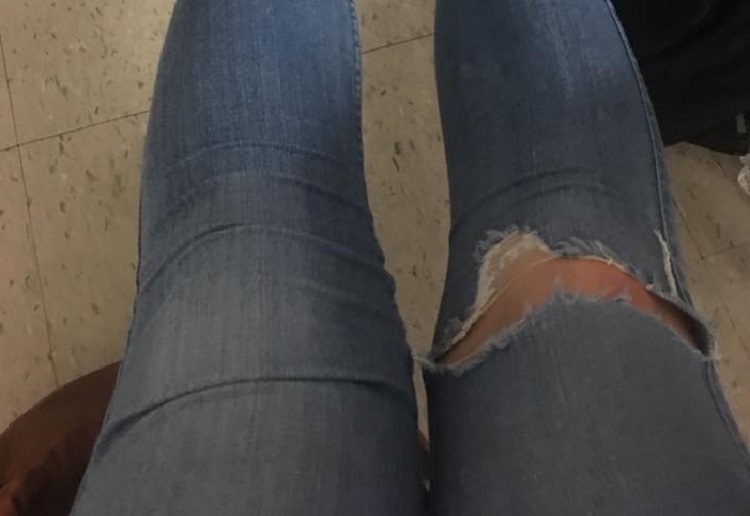 The mother of a teenage girl who was suspended for wearing ripped jeans is accusing her daughter’s high school of sexism.

Melissa McKinlay, who also happens to be the mayor of Palm Beach County, Florida, took to Facebook to express her frustration after her daughter received a dress code violation for wearing ripped jeans to school.

Melissa turned to Facebook to vent: “My daughter wore a pair of jeans today to school. They had a hole in the knee.

“In the middle of a quiz in her IB History class, a male administrator came to classroom, told her she needed to consider the guys in her class and their hormones when choosing her wardrobe, yanked her out of class and threw her into In School Suspension for the remainder of the day. So she missed an entire day of core classes and couldn’t finish her quiz.

“I’m sorry but EXCUSE ME? Perhaps she should have worn a different pair of jeans. But why should she have to worry about dressing a certain way to curtail a boy’s potential behavior? So, like, it’s her fault if the boy touches her because of what she was wearing?

“A boy’s potential inability to control his hormones warrants my daughter’s inability to attend her classes today and miss valuable curriculum?

“A male administrator yanked her out of a classroom because of a damn KNEE? Did he pull the boys out who were wearing shorts? They have TWO knees showing?

“This Administrator should be suspended.

“Here’s what the jeans look like. Did seeing this affect your ability to concentrate?

“I’d like to think her intelligence & quick wit, beautiful smile and wicked sense of humor might. Her knee?

PS If she needs a lunch detention for being slightly out of dress code, so be it. But this? No. Not an appropriate response. EVER.”

Melissa later shared an update after speaking with the school Principal,

“I have spoken to the wonderful principal at my daughter’s school and members of the School Board and am quite confident they are addressing the situation.
I have had nothing but positive experiences at all of the district schools my kids have attended and am a strong supporter of our public schools, so this incident caught me by surprise.

“As a strong advocate for women, and particularly survivors of sexual assault, the message that somehow a woman’s wardrobe is responsible for a man’s behavior is wrong. In any form. And I am hopeful this will be used as an opportunity to provide further sensitivity training to staff and students.

“My daughter indeed violated her school’s dress code and she will bear the consequences of that. But such a violation never warrants the experience she had yesterday.”