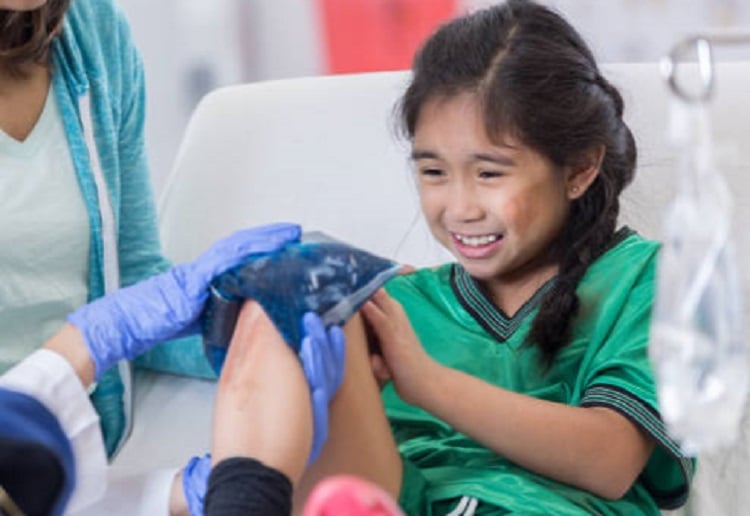 Taking to a popular Facebook group the Mum wrote: “Just a word on ice packs – be very careful.

“Many years ago now my then 2 year old son was given an ice pack for a burn (one of the blue gel types) it was clearly labelled non toxic.

“When I wasn’t looking he bit the corner off the pack and consumed some of the contents. He then put it away and I didn’t know.

“By that evening we were in the Westpac chopper being flown to Westmead. My son was in renal failure.

“He was very sick and spent a week in ICU on dialysis. He should have died. We were very lucky.

“The manufacturer of the packs (Taiwan) had replaced a non toxic ingredient with what you would know as antifreeze.

“It’s extremely lethal to humans and is a sugar alcohol that tastes extremely sweet encouraging kids to keep eating.”

The mum added, “My son has an acquired brain injury as a result of this incident. Please be careful with your little ones!”

The TGA have advised in the past that a number of brands of hot/cold gel packs were recalled following testing by the Therapeutic Goods Administration (TGA) of contents for ethylene glycol, a toxic substance.

Testing was undertaken following the previous recall of Thermoskin® hot/cold gel packs to determine if the problem was more widespread.

The TGA reiterates that parents should ensure that all gel hot/cold packs are kept out of reach of children and are only used under adult supervision. In the event of accidental ingestion patients are urged to attend the nearest emergency department immediately for assessment and further management.

A QLD vet also shared a story a couple of years ago after treating an animal who ingested a gel pack.

Greg Mahon shared, “I have just treated a dog with acute renal failure from ingesting a hot cold gel pack which are supposed to be non toxic – they should contain glycerine and methycellulose and water, or other similar ingredients.

This dog was put to sleep with acute renal failure, it began seizuring 36 hours after ingestion. Blood and urine analysis confirmed acute renal failure. Ultrasound of the kidneys showed a classical appearance of kidneys affected by ethylene glycol.

Analysis for ethylene glycol is difficult as the pathology labs I use don’t perform the test for it. We are currently examining the kidneys for evidence of refractile crystals. typical of this toxin.

Hot cold gel packs are NOT supposed to contain ethylene glycol but some clearly do.

Ethylene glycol (anti-freeze) will cause acute renal failure within 24 hours – and unless treated in the first six hours, is potential deadly. Because these packs are labelled “non toxic” most people would assume they are safe, and not seek treatment in the critical first 6 hour window.

The ingredients are sweet and sticky, and attractive to children and pets, leading to ingestion. There was a case of a child being poisoned in Newcastle.”

“I was shocked to find that the manufacturer of the icepack, imported from Taiwan, had swapped the safe chemical propylene glycol with the cheaper, toxic ethylene glycol.”

Greg added, “My advice – assume all of these packs are extrememly toxic. If they are leaking dispose of them safely and wash your hands.

“Do not allow them to be handled by children, and keep them away from pets.”