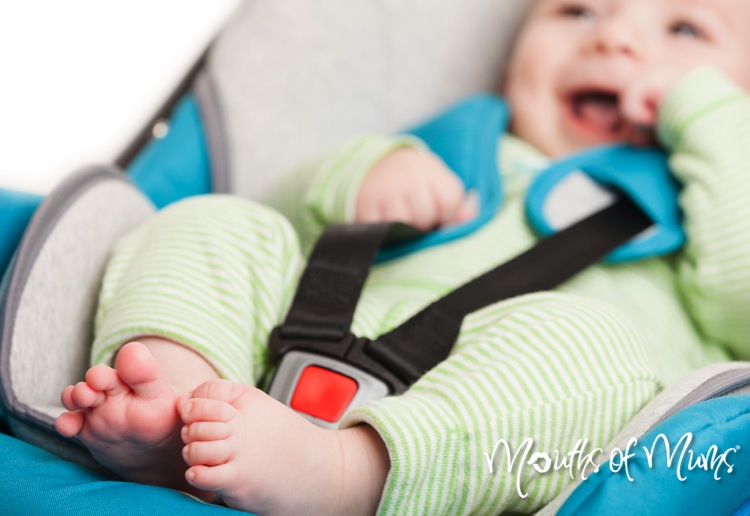 The mum of a newborn baby is urging parents to never carry their child out of the car in a capsule after her son almost suffocated to death.

Kate Gardiner, from Geelong, had arrived home from a friend’s place and in her rush to go to the bathroom, she carried her four-week-old son Floyd into the house in his capsule.

“I almost left him in the lounge room, but thought I’d better take him with me,” Ms Gardiner told Yahoo7.

But within seconds, the 28-year-old knew something was wrong.

“I took him in the bathroom and I just noticed that his face was really red … It was like he was trying to scream but he couldn’t.”

Panicked, the new mum unbuckled her son and noticed that he had started foaming from the mouth and shaking as if he was having a fit.

Unable to reach her phone while she held little Floyd upright, Ms Gardiner ran on the street.

“I just ran outside and just screamed for help,” she said.

“My neighbour came out and called an ambulance, and the lady across the road came out and said she was a doctor, so she checked up on him while we waited for the ambulance.”

“I seriously thought he was going to die, it was awful,” she said, adding that she had even taken a CPR course a few days before but was so panicked she couldn’t remember the steps.

When the ambulance arrived, Floyd had started breathing normally again – but Ms Gardiner was still unsure what had happened.

“The nurse explained that he probably slipped down in the capsule and his head flopped forward and cut off the airways,” she said.

Ms Gardiner said she had no knowledge about capsules and car seats being so dangerous outside of a vehicle, and is hoping her story will help to raise awareness in other parents.

“I thought they were designed to take out when they were asleep, but I didn’t know anything,” she said.

“There’s definitely not enough information out there about them. I’m so lucky that I was there to help him and I was there when it happened, because if I had left him in the lounge room he probably wouldn’t be here.”