Parents of toddler who died of cancer are facing jail for allegedly not seeking treatment.

Henry Clarence Lilly III and Bonnie Beth Mills-Lilly, from Oklahoma, have each been charged with first-degree manslaughter in connection with their three year old daughter’s death, according to local paper The Lawton Constitution.

Authorities were first made aware of the situation on January 3 when the parents placed a call to the Comanche County Sheriff’s Office reporting the girl was unconscious but breathing in the family’s camper home, where six other children were living, shares Yahoo.

First responders immediately took the child to the hospital, where she later died.

A medical examiner confirmed she had the oversized tumour at her death, but authorities were baffled about how it could have reached that stage.

Sheriff Kenny Stradley told Newsweek investigations were ongoing as to why the child did not receive treatment for her tumour that had grown to over 7kgs.

The parents were charged on January 7 and made their first court appearance on January 10. 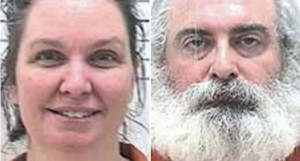 They are each posted a bond of $83,000 and were released but have to wear GPS monitors.