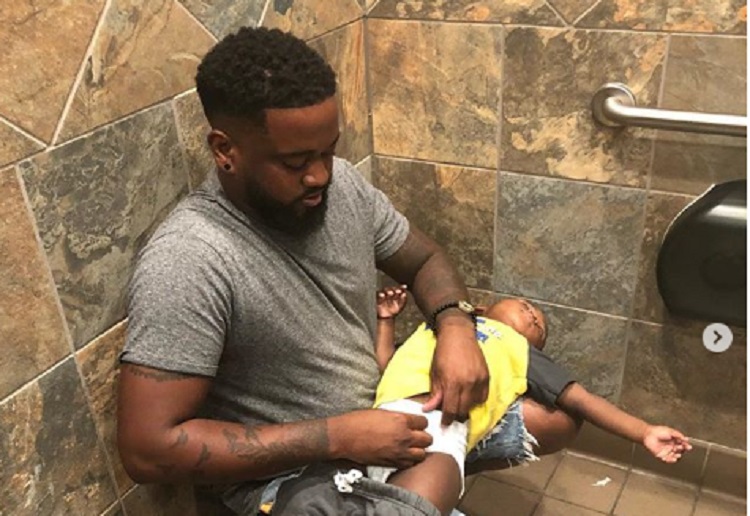 A father who was forced to squat to change his son’s diaper in a public restroom says dads need changing tables too.

“This is a serious post!!! What’s the deal with not having changing tables in men’s bathroom as if we don’t exist!!” Donte Palmer, a high school teacher in Florida captioned an Instagram photo of him changing his son’s diaper in a restaurant bathroom.

“Clearly, we do this often because look how comfortable my son is. It’s routine to him!!!! Let’s fix this problem!” he posted before also calling on activist and football quarterback Colin Kaepernick to “drop a knee to this issue!”

The father tagged the news outlet The Shade Room in his post, which subsequently published the photo, assuming more than 400,000 likes.

Donte, 31, told Yahoo Lifestyle that the image reflects his daily routine with his three boys, ages 12, 7, and 1.

“We had stopped at Texas Roadhouse for lunch and while my wife ordered food, my son Liam started fussing so I knew it was time for a diaper change,” he says.

With the help of his eldest child Isaiah — whom Palmer calls his “diaper assistant” — the dad began the precarious task of changing the baby in the men’s bathroom.

“I usually lay Liam down on clothes I keep in the diaper bag or the bag itself, and Isaiah hands me wipes or throws out the dirty diaper,” explains Donte who was unaware that Isiah had snapped his photo but later, acknowledging the humour and posted it online.

“People have commented that my wife is ‘lazy’ for not changing our baby’s diaper or that I could have changed him in the car but why should I?” says Palmer.

This is a serious post!!! What’s the deal with not having changing tables in men’s bathroom as if we don’t exist!! #FLM #fatherslivesmatter clearly we do this often because look how comfortable my son is. It’s routine to him!!!! Let’s fix this problem! I Kaepernick drop a knee to this issue! @theshaderoom let’s show the innovation of fathers!

He is not alone!

Chris Boneyard Mau shared in May that he was getting pretty sick of having to change his daughter on a disgusting floor because the only changing table is located in the women’s bathroom.

“It’s crazy to imagine I know, but there are guys who take care of their kids too you asshats. If it’s a public place with public restrooms in the generation of equality among genders and races then how about making sure us fathers can change our children’s diapers on a goddamn changing table like the mother’s can. Am I asking too much?”

Although if he read this post on change tables he might have second thoughts! “Young Mum Shares Warning About Using Baby Change Tables in Public Areas”