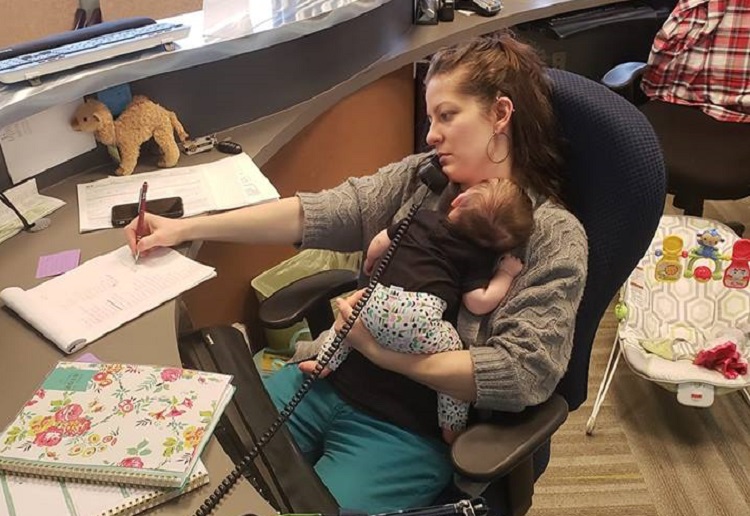 A photo of a mum cradling her baby daughter while working in the office has gone viral.

New mum Melody Blackwell had recently returned from a three-month maternity leave and was bringing her baby, Nora-Jo, into the office once a week while working from home the other four days.

“I was excited when [my boss] said that was a possibility,” Melody told Yahoo Lifestyle. “I didn’t know if it would be.

“I knew it was going to be hard for me to leave her when she was so young. I know it’s hard to drop them off at daycare when they’re just two or three months old.”

Dr. Elizabeth Baker, who owns Maryland Farms Chiropractic in Tennessee, US, where Melody works, was walking past the mum’s desk when she spotted her busy multitasking. She decided she had to capture the moment and share it on her business’ Facebook page.

“That was one of the first few days Melody brought the baby in the office,” Elizabeth told Yahoo Lifestyle about the day she took the photo.

“I honestly was taking it to post onto our office Facebook page for our patients who had been asking about how mom and baby were doing since she had been gone for three months. I wanted to share that with our little following for the office. I never thought it would get so many comments and shares!”

In the post, the chiropractor praised the “sweet and content” baby as well as Melody, who “makes it look easy.”

She asked people to share the photo – and to share their own photos – to encourage “more small and large businesses to see this is doable and should be allowed more often”.

“Once she got pregnant I knew we needed to figure out a way to make this work,” Elizabeth said. “We had nine months to plan, at least!”

Melody says she’s grateful that she gets to care for her daughter and work full-time.

“All the patients love to see her when they come in,” she told Yahoo Lifestyle. “But so far no one has asked to hold her, probably because she’s so young.”

The chiropractor realises that remote work situations — and allowing babies in the office — are not always possible everywhere, but she encourages employers and employees to at least open up a dialogue about it.

“If it’s an environment where baby crying is okay,” she said, “I think more small and large businesses should look more toward allowing that.”