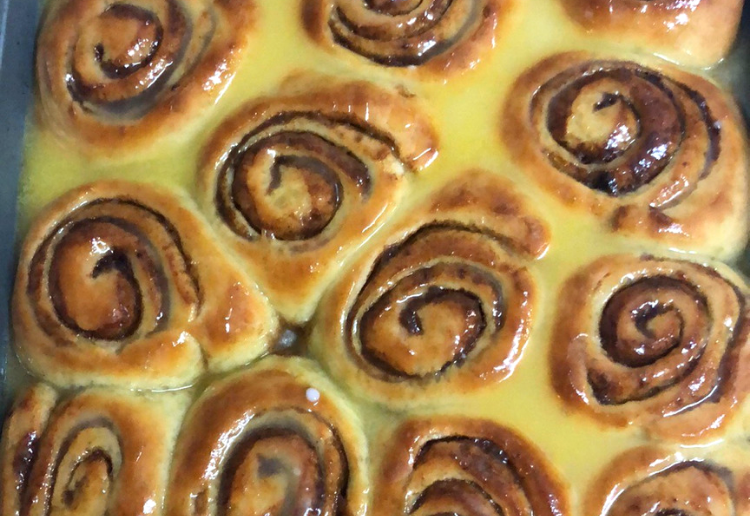 These cinnamon scrolls never last long in our house! You will not believe how good these are straight out of the oven with a cuppa!

We won’t say these will be whipped up in 10 seconds but we will say that you’ll be amply rewarded by taking the time to make these cinnamon scrolls.  Everyone will be raving and they’ll definitely be coming back for more. And once you’ve made cinnamon scrolls a few times, you’ll remember the recipe by heart and they’ll become your favourite go-to recipe.

Perfect for school lunches too.  Have some fun experimenting with your fillings – add some sultanas or currants to the filling and sprinkle with toasted flaked almonds once they are cooked.

If you love the Custard Scrolls from Bakers Delight you could always use your scrolls as a base – let them cool completely then top with a butter cream icing and sprinkle with coconut instead of using the suggested drizzle in this recipe.

Double batch these Cinnamon Scrolls too – they freeze beautifully.  Why not wrap each one individually in cling wrap then the kids can just grab one out each day and pop into their lunchboxes?

Have made this recipe a few times and really loved it. I have added the recipe ingredients in order to which you use them which is why there are a few that say butter/Milk etc. make sure when adding your liquid to the yeast mixture that it isnt too hot as it can cause your mixture to not rise as it kills the yeast! Also if the mixture is still a bit tacky just add another tablespoon or two to the mix while in the kneading stage.