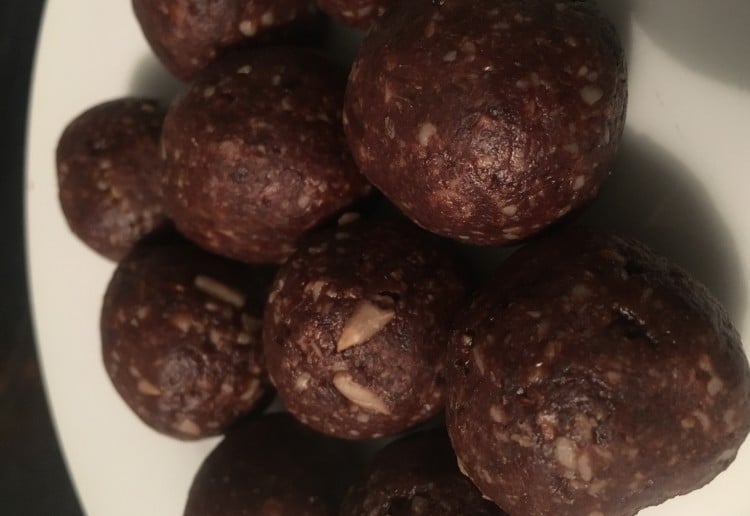 My toddler is very fussy and dairy intolerant. This delicious chocolate bliss balls recipe has been a lifesaver as he is getting the goodness from dates, seeds and coconut oil but believing he is having a special treat! Plus these are a great nut free addition to the older children’s lunchboxes that adheres to the school’s no nut policy.

This Bliss Balls recipe is one of many floating all over the internet, and people are loving them! They’re vegan, and contain only a few ingredients.

Another fantastic thing about this bliss balls recipe is that there’s only 2 steps: blend all the ingredients in a food processor, then roll them into balls! This is another recipe that’s great for including the kids if they’re begging for some fun baking time. Measuring out the ingredients is relatively quick and easy, as there are only four to worry about. After the food processor has done its work, the funnest part for kids is grabbing a spoonful of the mix and rolling it into a ball. I always find that if kids help in the making of something, they’re more likely to eat it! It’s probably only a psychological effect that makes their food taste better, but it works!

However, if you really don’t have time or want messy hands roaming the house after the fun is done and the balls are in the fridge, then this bliss balls recipe is super easy to make just by yourself. It’s a fairly quick process, aside from the refrigeration stage. The best thing about this bliss balls recipe is that they’re nut free! After making these bite-sized treats you won’t have to worry about sending your kids off to school with these packed for recess. A lot of other recipes for bliss balls suggest adding nuts, but these babies are delicious just by themselves.