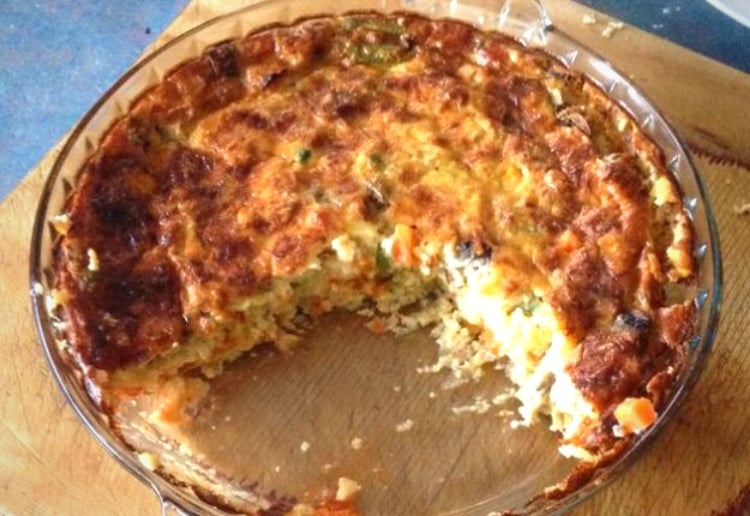 Impossible Pie is so easy to make and is always delicious! And when you look at this recipe … it seems impossible!

The wonderful thing about an Impossible Pie is that it’s pretty much just throw all the ingredients together and then watch it become a pie as it cooks.

We also love that with an Impossible Pie, you are free to add and subtract ingredients as you like.  Got a family who LOVES cheese? Just add a little more cheese on top.  Got a family who’s really good with their vegetables? Just throw in another handful.

According to an article on The Awl, Impossible Pie first became widely known in the 1970s when it was printed on the backs of Bisquick boxes in the United States. The Bisquick mix  was reportedly invented in 1930 by a General Mills executive who, while on a journey by train, complimented the chef in the dining car on his fresh biscuits.

The chef showed him how he pre-mixed shortening with the dry ingredients of flour, salt and baking powder and kept the mixture on ice in the train kitchen so he could prepare the biscuits very quickly.

When General Mills created their biscuit mix, they replaced the shortening with hydrogenated oil so that the product wouldn’t need to be refrigerated.

At first they marketed it solely as a fast way to make biscuits, but soon, in an effort to increase sales, they started suggesting that consumers use it to make a variety of other foods, including pizza dough, pancakes, dumplings, cookies and, yes, you guessed it, even pie.

We love this Impossible Pie recipe from MoM Member Ellen; so easy and nowhere near impossible

If you’ve got your own version of Impossible Pie, we’d love to hear what you add.  Or if you’ve tried this recipe, let us know how it turned out in the comments below.