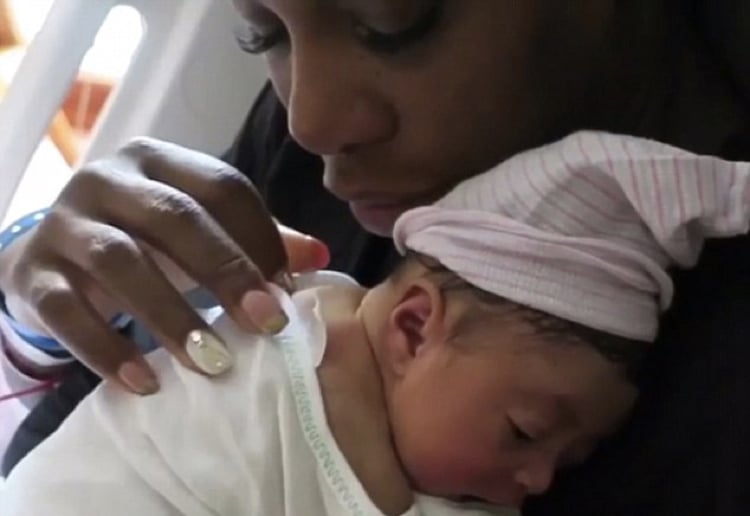 This makes us cry (happy) tears! Serena Williams’ husband, Alexis Ohanian, has paid tribute to his tennis superstar wife with a beautiful video to celebrate her return to US Open final only a year after she nearly died at the birth of their daughter.

As reported in the Daily Mail, the Reddit co-founder created a mash-up of footage of Serena, in the hospital with their newborn daughter, Alexis Olympia Ohanian Jr. last September and included her on-court interview after Thursday’s tennis match. He published the powerful video on this Instagram page.

‘She fought for her life, for our child, for recognition, for equal pay, for women’s rights. She never gives up. She’s passionate and unrelenting and the most inspiring person I know,’ Alexis shared on the post.

‘I had this made for @serenawilliams last night after her match with some home videos from 1 year ago this week. Help me make sure she sees it! #iloveyouserena,’ he said emotionally in the caption.

The video starts with Serena being interviewed at Arthur Ashe Stadium after she beat Anastasija Sevastova 6-3, 6-0 in just over one hour.

‘A year ago, you were not here,’ the interviewer says, and the video cuts to footage of Serena lying on a hospital bed, holding her newborn daughter in her arms for the first time.

The tennis had to have an emergency cesarean section. In the video, she is connected to wires and is wearing a nude bra and a hair cap.

“I Am So Grateful”

‘What does it mean to return to the final stage a year later,’ the interviewer asks Serena in a voice-over.

‘It’s honestly really incredible. A year ago, I was fighting for, literally, my life at the hospital after I had the baby,’ Serena says, her voice shaky with emotion.

The video shows snatches of Serena in the hospital with an oxygen mask on her face and with little Olympia, followed by a scene of her wearing her infamous black tutu dress for her first match of the tournament.

‘So every day I step out on this court, I am so grateful that I have an opportunity to play this sport, you know?’ she says. ‘So no matter what happens in any match — semis, finals — I just feel like I’ve already won.’

She fought for her life, for our child, for recognition, for equal pay, for women’s rights. She never gives up. She’s passionate and unrelenting and the most inspiring person I know. I had this made for @serenawilliams last night after her match with some home videos from 1 year ago this week. Help me make sure she sees it! #iloveyouserena

The video has already had over 280,000 views and growing, and many people have commented on how Serena is such an inspiration as well as giving Alexis praise for such a beautiful video.

‘What an inspiring athlete, advocate, businesswoman, wife, mother, BOSS!’ one person wrote, while another added: ‘This just made me cry like a baby @alexisohanian that was a beautiful tribute to your wife, love you and @serenawilliams and your beautiful baby girl.’

But then, the day after giving birth, Serena was experiencing a shortness of breath and scans revealed she had several blood clots in her lungs.

Serena shared this scary experience with CNN earlier this year and explained that she suffered a ‘slew of health complications’ during ‘six days of uncertainty’.

A drip with anti-coagulant drugs was administered, but constant coughing from her pulmonary embolism opened up the scar from the c-section and her abdomen filled with her now-thinned blood.

Her life was saved when doctors inserted a filter into a major vein to prevent any more clots from entering her lungs, and she was put on bed rest for six weeks.

Only six months later, Serena returned to the competitive tennis circuit and now is only one match away from winning her first Grand Slam title since becoming a mum.

If she defeats 20th seed Naomi Osaka, 20, of Japan in the US Open final on Sunday, she will equal the all-time record haul of Grand Slam titles.

Serena celebrated her victory on Thursday by publishing an adorable photo of her baby girl wearing a black tutu dress that is identical to the one she wore in the tournament.