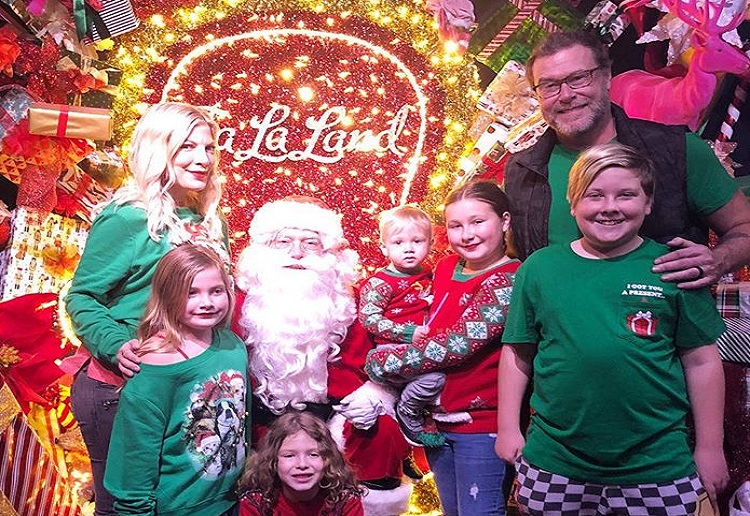 Tori Spelling shared a sweet shot of her family alongside her “Beverly Hills, 90210″ pal, Ian Ziering, and his own wife and kids on Instagram Thursday.

But what started out as an innocent update turned into anything but in the comments section.

I can’t believe @ianziering and I once played BH teens Steve Sanders and Donna Martin and now we are married to the loves of our lives and between us have 7 kiddos who all adore each other! . Tonight, @erinziering and I hosted a screening of @adogswayhome for @sonypictures at @sohohouse fir family and friends and a massive kiddo takeover. . What a special movie! It’ll make you laugh, cry, and go Ahhhh many times. We all loved it! What a special night (even in this crazy LA rain)

Followers criticized the kids for a number of so-called faults, including having “greasy hair and wrinkled clothes,” looking “chubby,” “terrible,” “cheap,” “shabby,” “unhealthy” and far worse. But McDermott wasn’t willing to just silently scroll past the trolls.

Winter Wonderland ❄️alert … . LA kids + snow = mass excitement! We headed to Lake Arrowhead this past weekend and were lucky enough to not only stay at the amazing @lakearrowheadresortandspa but we also got a fresh snow fall during our visit. The kids had so much fun sledding and playing in the snow. It’s so cool to know that a short drive ( less than 2 hours) from Los Angeles we can take the kids to the beautiful mountains and experience fun in the snow with them. They are all excited to come back and ski and snowboard this winter. Are your kiddos skiers ⛷ or snowboarders? . #winter #lakearrowhead #snowvalleymountainresort #sledding #snowplay #family #winterweekends #mountains #snow

“I am absolutely horrified and disgusted by the comments being left about my children,” he wrote in a reply of his own. “Body shaming and bullying my children??!! What is wrong with you people??!!” From there he launched into a lengthy defense of just a few of the points that were raised.

“For your information, we went from a long day at school to the movie,” he explained. “And I don’t know any child that is NOT disheveled at the end of the day. Not to mention that just before this picture was taken, they were wrestling and running around with all the other kids that were at the movie. So I apologize we didn’t get the iron and steamer out to make them perfect for you. (They’re) kids. They’re messy and dirty. That’s what they do.”

“As far as saying my children are overweight, well, that’s just mean and uncalled for,” McDermott wrote.

“They’re going through different growth phases, and even if our children are on the bigger side, who cares? They’re happy and healthy and I’m sorry they don’t look like skinny supermodels. People come in all shapes and sizes. So who are you to judge? You should all be ashamed of yourselves for passing such horrible judgement on innocent beautiful children. Shame on you all!!!!!”

School officially began today for my 4 older kiddos… This marks the first year that they’ll all be in the same school at the same time. You know what that means? For one year and one year only ONLY 1 drop off= Happy Mom ????????‍♀️And, Finn started Kindergarten at his new school and felt so proud to be at his big boy school with his older brother and sisters. #ThisIsFourInElementarySchool #SixthGrade #FifthGrade #FirstGrade #Kindergarten #Liam #Stella ##Hattie #Finn

What on earth is wrong with people?!