A man has been charged with kidnapping a seven-year-old girl from a Kmart store before sexually assaulting her in bushes nearby.

The father of two young twins will face court again on Wednesday charged with taking the girl from a Westfield shopping centre in North Lakes, north of Brisbane, shares Daily Mail.

The alleged abduction was mentioned in a Facebook post which warned parents to keep a close eye on their children during the frantic Christmas shopping season. 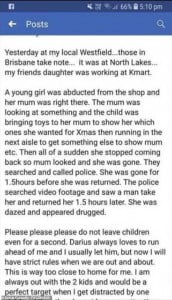 The 26-year-old man allegedly lured the girl from her mother when she was out of sight at a Kmart store.

He then allegedly drove her to bushland in Pumicestone Passage before sexually assaulting her.

After the assault, the girl was driven back to the shopping centre and left there.

The man has been charged with taking a child for immoral purposes, deprivation of liberty and indecent treatment of a child under 12.

A Brisbane mother claims she was also at Kmart on Saturday and saw the man lurking around and staring at her 8 year old daughter.

“I had a terrible gut feeling about him!”

She told Daily Mail that she never normally leaves her daughter, so has been left feeling sick thinking about it now.

‘There was a guy standing there leaning on the shelf… his eyes were just fixed on my daughter and he was only an arm’s length away from her.

‘I called for her and then he was startled, he looked at me and walked away. Straight away, I 100 per cent had a gut feeling that something wasn’t right… now that I know what happened I just feel sick.’