Article You Won’t Believe What Red Rooster Is About To Start Serving! 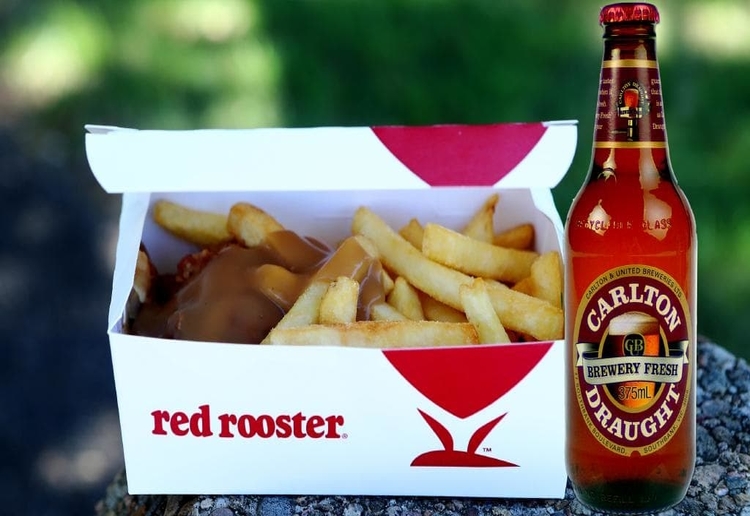 The popular fast food chain is set to add beer, wine and other alcoholic beverages to the menu at select Victorian stores.

From now until the end of this year, Red Rooster will offer its customers a range of alcoholic beverages along with their chicken and burgers. As part of a trial during the summer party season, the fast food chain hopes the menu additions will help keep the franchise relevant.

In a press release explaining the move, Red Rooster said “these beverages represent the perfect pairings for our roast chicken menu – Aussie crowd pleasers that will make entertaining and eating all the more enjoyable.” Stores including Ascot Vale, Doncaster, Hampton, Karingal, North Frankston and Sunbury will be the first to trial the new menu. There will be limits placed on the amount of alcohol able to be purchased as part of an order, with a six pack of beer or a single bottle of wine per customer.

Trying Something Out Of The Box

It isn’t the first time Red Rooster has attempted to improve variety and choice for its customers. In February it was announced that fish, lamb and vegetarian options would also be joining the menu. A Red Rooster store in Sydney’s south-west also told the Daily Mail that it had plans for trialling Halal gravy with the possibility of rolling out the product nationally. “We’re continually transforming and evolving the menu,” former CEO Chris Green told The Daily Telegraph. “McDonald’s started off as beef, probably half of what they sell is chicken now. It’s about listening to customers.”

Not Everybody Loves The Idea

Rodney, a long time Red Rooster customer told news.com.au that he believes the chain is trying to compensate for its declining popularity. “They have to try something new because they’ve stuffed up the chicken,” he said. “It’s been a favourite of mine for 30 odd years but now it’s the worse takeaway on the market.”

Personally we think alcohol and fast food sounds like a case of double the fun, double the guilt – perhaps Red Rooster should stick to doing one thing well, rather than trying to do it all?

What do you think of Red Rooster’s menu additions? Tell us in the comments!