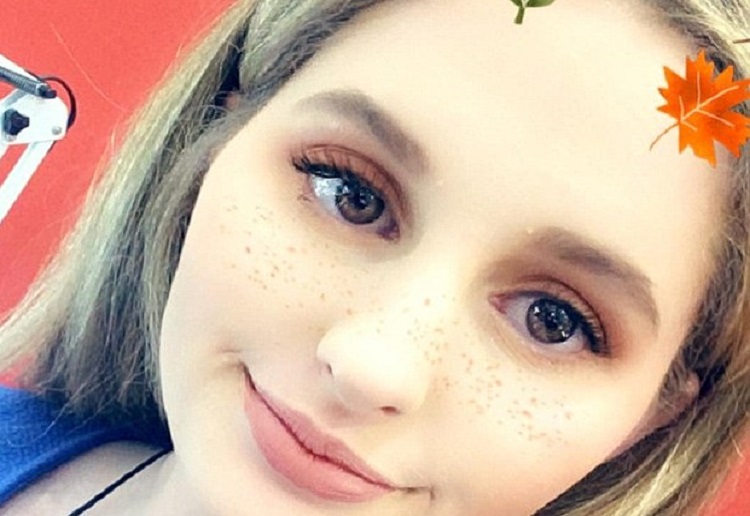 A young girls dreams were shattered as her teammates flew out of Perth Airport to NZ without her when she was removed from a Netball trip at the last minute.

Emily Benbow, 15, said her principal at Darling Range Sports College, Katie Edwards, banned her from the trip over unfounded fears about her mental health – despite being cleared to go by a doctor.

Emily said the decision was based on a false rumour circulating at the school that she planned to self-harm on the tour.

A doctor had declared Emily mentally fit to participate and her mother Halena even offered to escort her on the trip at her own expense.

‘To have it taken away at the last minute because of a rumour that she was going to “neck herself” is appalling.

‘She’s an emotional kid who’s been bullied her whole life. She’s six-foot-two with the world at her feet and has a massive passion for netball.’

Emily’s parents were told the school had a duty of care to protect the schoolgirl’s welfare.

Emily said the vicious rumour stemmed from a Snapchat post a week earlier that was taken out of context and spun into something concerning.

‘I’m extremely angry, I can’t even tell you how upset I am right now,’ she said.

Emily had heard her ex-boyfriend attended her club netball grand final last Saturday, which led to them meeting at a shopping centre.

They got into an argument and Emily made two posts, the first saying ‘someone help me with my guy issues’, and the second ‘I want to neck’.

Emily said the second post meant she wanted to vomit, but was spread by classmates to mean she wanted to hang herself in New Zealand.

‘The argument was getting out of hand and I had a sick feeling like I was going to throw up,’ she explained.

The school found out about the posts on Tuesday and emailed her parents asking to ‘discuss some concerns we are having with the netball tour’.

An appointment was set for Thursday, which Ms Benbow said she assumed was a routine discussion of her daughter’s mental health plan.

‘I felt like I was walking into an ambush. I had a matter of a few minutes to comprehend everything,’ she said.

Later Emily was pulled into another meeting with student services manager James Embley, brother of West Coast Eagles star Andrew Embley, who asked her about the rumour.

‘I was in tears and angry and had a million things running through my head. I didn’t know what to do,’ she said.

Hours later she got the bad news: ‘They said I’m not going because it’s a duty of care issue and we don’t want to be responsible for anything you do.’

However, Emily and her parents said the school told them if she passed a mental health assessment from a doctor she would be cleared to go.

Doctor’s even gave Emily the all clear

The next morning Emily saw Dr Muhammad Mian-Rehan, who gave her the green light to go on the tour.

‘She is mentally fit to travel and is not a risk to herself and others,’ he wrote, also noting Ms Benbow planned to travel with her as support.

After a day of waiting, the school finally notified the family by email at 4.37pm, saying Emily was still excluded from the tour.

‘The decision not to allow Emily to go on the trip to New Zealand is based on consideration of various matters and the balancing of the school’s responsibility and welfare of Emily, the other students and the staff,’ Ms Edwards wrote.

‘In the circumstances the school will not allow Emily to go on the school’s trip to New Zealand.’

Ms Edwards said she considered WA Education’s international excursion and duty of care policies, and the school response and planning guidelines for students with suicidal behaviour and non-suicidal self injury.

Ms Benbow said Mr Baxter discussed the issue with Ms Edwards but she still would not change her mind.

‘All Emily wants to do is go away with her school team, play netball, and shoot some goals just like (Australian national player) Caitlin Bassett, her idol,’ Ms Benbow said.

The outraged mother implored the school to change its mind, fearing being kicked off the tour would have ‘catastrophic consequences’ for her daughter’s mental health.

‘Emily has worked extremely hard on self improvement and continues to strive to better herself… she has been excited [about this trip] for months,’ she wrote.

‘Seriously, it has been the only thing that has motivated her to strive for greatness. We are concerned more about her mental health if you don’t allow her to go.’

Mr Benbow said Emily was a passionate netball player who won a spot at the school through a competitive tryout.

‘I have a devastated daughter who’s had her dream taken away from her,’ he said.

‘My daughter is fine, she’s not going to hurt herself. All I want to happen is for my daughter to get on a plane so she can play. They’ve said they’ll refund the $3,000 we spent but it’s not about the money.

‘She’s just a normal, everyday kid who loves her netball and has had this taken away from her.’ 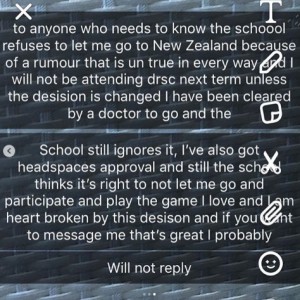 Do you think the school are doing the right thing?