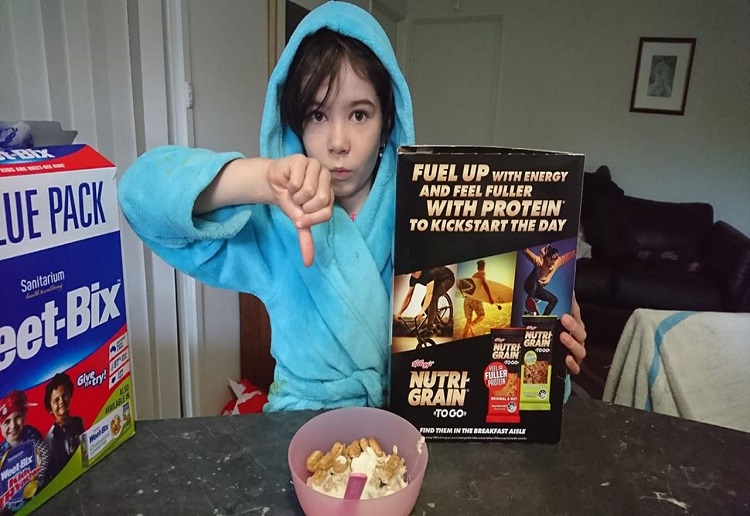 Young girls actions has forced Kellogg’s to change its packaging of Nutri-Grain.

Youn Daliah Lee, 8, sent a handwritten letter to the cereal giant in May calling it out for its sexist packaging.

She pointed out the fact that “girls could also do something awesome” just as the boys on the box could.

The schoolgirl’s mother Annabelle described the moment Daliah realised something didn’t sit right with the packaging on her Facebook page, reports Yahoo 7.

“One morning earlier this year Daliah was eating breakfast of Kellogg’s Nutri Grain and noticed that only boys were pictured on the box doing extreme sports. Not a girl in sight,” Ms Lee wrote on Facebook.

“She asked me what was happening and grabbed at the opportunity to write to Kellogg’s herself and ask them to fix it.”

In the letter dated May 10, Daliah asked: “Why can’t girls be on the back?”

“Can this please stop it’s not fair. Girls can do something awesome too.

“I’m happy because the Weet-Bix brand puts girls on the front and the back of the box. Please fix this.”

Kellogg’s initial response to Daliah’s letter with a standard note thanking her for her feedback and advising that her comments “will be forwarded on to our product development team”, was described as “kind of blah, blah, blah” by the young girl, so she started a Change.org petition to take her cause to a wider audience. 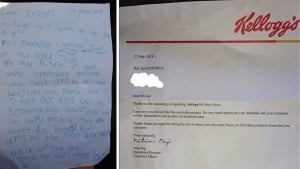 The online campaign soon became noticed by The Canberra Times, with media coverage on Friday putting pressure on Kellogg’s to take the young feminist’s complaint seriously.

The company has since reportedly promised to change its Nutri-Grain packaging next year to include pictures of both males and females.

“We’re very proud of our long history, inspiring Aussies both males and females to live unstoppable lives with the Nutri-Grain brand and, in the past, have featured women on Nutri-Grain packaging,” she quoted the company’s response

“Hearing Daliah’s passion and, as a company that values diversity and inclusion, we’ve decided that we will update the back of pack imagery with images of both females and males. This will be rolled out in 2019, so that we can continue to inspire all Aussies no matter their gender.”

She is not the first young girl to take on the giant this year. Another young schoolgirl managed to force Kellogg’s to change the wording of a new advertising campaign after she wrote to complain about it being ‘sexist’ for saying “Approved By Mum’s”. Read more on that here