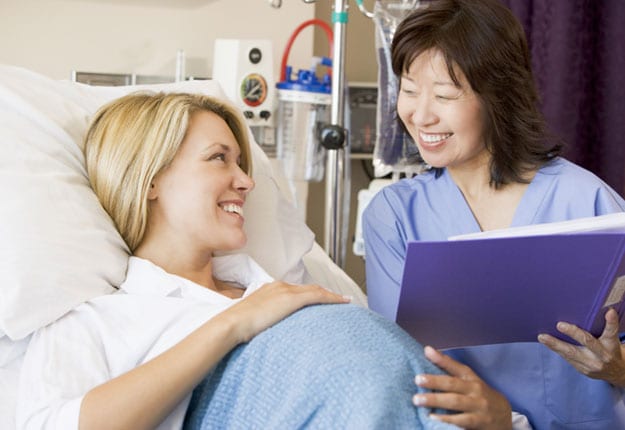 My recent blog outlined what I saw for myself during labour. I was lucky to have my baby eleven days early, right after I’d been crying to my mother that there would be no way I could stand another two weeks of being heavily pregnant. Now that I’ve been through it and come out the other side, I can safely say that the whole ‘visualising an opening flower’ concept can take a running jump, especially once you hit that transition stage! I tried really hard to stay calm in the beginning, but once the pain got too much the only thing that helped was screaming at the top of my lungs.

Here’s a rundown of what it was really like, written before the hormones charged in and wiped out the memory:

3:30pm Waters broke. Packed a bag just in case it was the real thing and Garrett drove like maniac to the hospital, even though I wasn’t in any pain at all and I was just really excited that pregnancy would nearly be over.

5pm Slight contractions while the midwives were checking my blood pressure, plus it was raining so they said I could stay the night at the hospital and not go all the way home to Scotland Island.

5 – 9pm Period pain-ish contractions, 6 – 8 minutes apart. Hung out and read books and Garrett went and got himself a meal and me some Powerade.

9pm Contractions were down to four minutes so moved into the birthing suite, had a couple of panadeine forte and got in the bath.

9pm – 6am Hung out in the bath running the hot water, Garrett tried to sleep in a chair but it was hard because I was making hurting noises every few minutes. It was still ok, about twenty deep breaths and they would pass. I slept a tiny little bit.

6am – Sick of the stupid bath.

7am – Contractions slowed down to 8 minutes apart. Was nice to have a bit of relief, except it meant no baby any time soon and I was pretty tired.

7am – 10am – Checks with various midwives and doctors. Had breakfast, tried to chill between contractions. Threw up once.

10am – Doctors decided to give me some hormones to speed things up. Was only one centimetre dilated. Felt very cross about this. Cried to Garrett. Refused to let him leave to get some food for himself.

11am – Injection – party time. Sat next to the happy gas dispenser and figured out how to use it. Had a morphine shot as well.

The next three hours – Yup – super awful. Each contraction was ten to twenty breaths of unbearable. Tried to hurt Garrett by pinching him as hard as I could, sucked on the happy gas until the room was spinning, refused to do what the staff told me, cried, asked to have a nap for a while, thrashed about, declared that giving birth just couldn’t be done. Kept asking the time because I had in my mind that if the baby wasn’t out by five pm I’d just go home like on a normal work day and come back in the morning. Was so tired I couldn’t open my eyes. Swore a little bit – how rude. Garrett stayed amazingly calm and was so encouraging without being overbearing, he was a total rock.

2pm – Dilated enough to push. Told the staff they didn’t know what they were talking about, I didn’t have any energy and was too tired and they’d just have to figure out how to remove the baby without me. Figured if I refused to push it would just be their problem and I could have a nap. At that point if they’d have offered me a caesarian I’d have said yes, just so I didn’t have to do anything.

Pushing – The urge to push that everyone speaks about did actually come, and then I finally felt like something was happening so I went with it. I know this is really cliche but I found it really empowering to push, I could feel the baby properly for the first time and could tell it was creeping towards the end point. Garrett said he could see the head and I really wanted to do him proud so I decided to stick around and finish the job.

3:30 – Rafferty David Mitchell Sherman slid out – amazing, amazing amazing. All pain completely gone. Placenta delivery was nothing at all. His weight was 3.6 kilos and I couldn’t stop smiling, even while I had a couple of stitches to repair the damage.

After that – Pain turned into endorphins. Took five thousand photographs and texted the entire world with the news. Didn’t feel tired again till about 48 hours later. Instantly felt like I would go through it all again at the drop of a hat.

Garrett is not so sure.

So that was my experience, something I have waited so long for. And now I am one of those people who bleats about it all being worth it, because every time I look at little Rafferty, I know that it was.