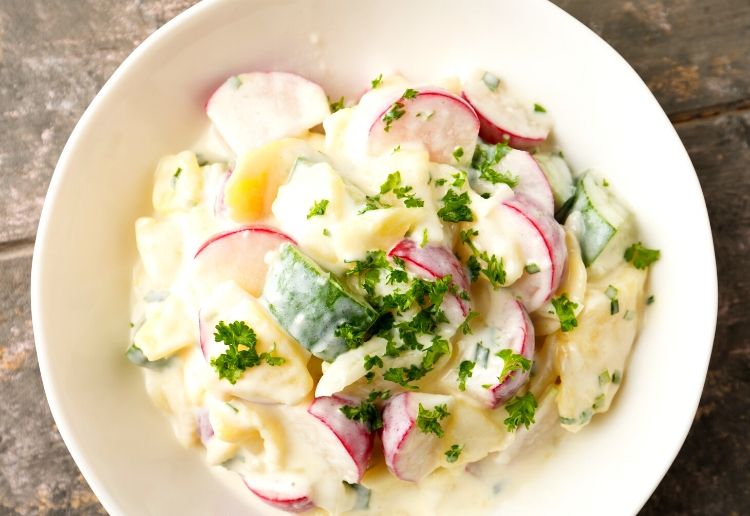 This Potato Salad Recipe is perfect if you want a recipe with a bit of crunch. Not just mushy potatoes smothered in mayonnaise!

Potato Salad Recipe with a crunch gives you almost two salads in one. A potato salad plus the crunchy addition of garden fresh radishes and lebanese cucumbers. All topped off with a light dressing and a sprinkle of continental parsley.

Which potatoes are best if you’re making a potato salad recipe?

To be honest, we find potato selection a little bit daunting.  There are so many varieties!

So whether it’s roasting, mashing, boiling, chipping or making your own gnocchi … there is a potato for everything!

So what about this Potato Salad Recipe?  Which potatoes are best?

According to the good folks at Better Homes & Gardens, the best potatoes for a potato salad recipe are waxy potatoes.

Waxy potatoes: Potatoes of this type have significantly less starch in them, and have a waxy skin. They have more moisture in their flesh, and when boiled and cooked, hold their shape exceptionally well! Waxy potatoes are great for recipes that call for boiling, roasting, or slicing (such as Hasselback potatoes!).

We love that with any potato salad recipe, you’ve got the option to have some fun.  We’re not really fans of straight up boiled potatoes with a thick mayonnaise dressing.  We like to make our potato salad recipe with some crunch.

In this recipe, we’ve used garden fresh baby red skinned radish and lebanese cucumbers.  Both super crunchy.  If you’re not a fan of radish you could double the cucumber.  Or you could add some finely sliced celery.  Or even apple which would make for a lovely sweet crunchy potato salad recipe.

Is this the best Potato Salad Recipe?

Once you’ve tried this recipe, tell us what you think.  We’d love to hear your thoughts in the comments below.

Thanks for checking out this recipe x