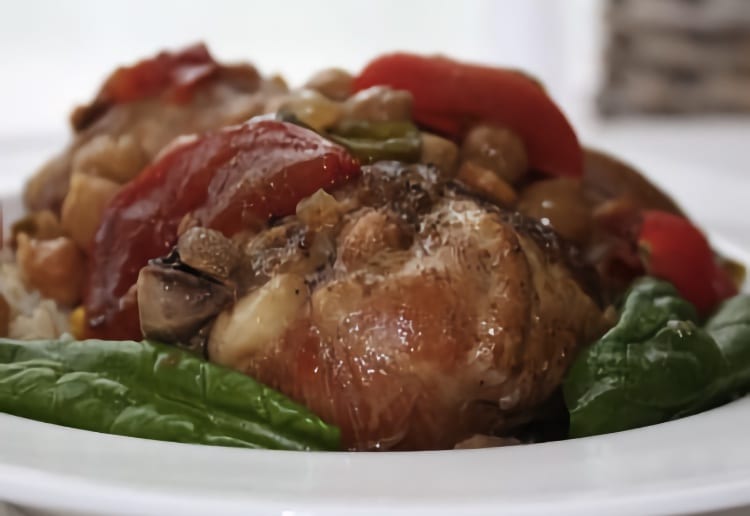 The minute the nights get shorter and colder, I see that as the perfect excuse to get the slowcooker out … and use it as often as possible.

For those who’ve never actually used a slow cooker (or a Crock Pot as they used to be called when I was a child in the 70s), there are a quite a few benefits:

1. The process of slow cooking allows us to use cheaper cuts of meat that are better cooked slowly over long periods of time.
2. The slow cooker can be left on safely all day without requiring that you be at home to check and stir constantly.
3. All the goodness of the food is retained – the food cooks in it’s own juices and these are then all served up rather than being tipped away when you drain the veges.
4. Dinner is ready when you and your kids come busting through the door right on dinnertime … and everyone is starving.

Modern day slow cookers are now even sexier – allowing us to cook on the stovetop (to brown meat, fry off onions and herbs etc) and then transfer to the slow cooker for the slow cooking part.

So, a week or so ago, I got up 15 minutes early and threw in all the ingredients for a Chicken & Chick Pea ‘Casserole’ (for want of a better word).

I will usually make a double batch given I have a very large slow cooker and it allows me to freeze half for another dinner when I’m out of control – the quantities here provided two meals for Mum, Dad, hungry son and two little girls.

1kg of chicken drumsticks (skin on or off – your choice)

1 lemon cut into wedges or chunks

Optional: feel free to add as many other veggies as you like – I often dice carrots, zucchini or use long slices of red or orange capsicum.  In my opinion, the more veggies, the better.

1. Either in your slow cooker or in a separate pan brown off the chicken drumsticks – aim for a nice golden brown coverage on all sides
2. In the last couple of minutes of browning, throw in the diced brown onion and finely chopped garlic
3. If you have a ‘cook in’ slow cooker, pour over the chicken stock, the white wine and add the herbs, lemon wedges, chopped tomatoes, chick peas and salt & pepper as well as any other veges you’d like to include
4. If you have a ceramic slow cooker, you’ll need to transfer the chicken, garlic and onions from the browning pan into the slow cooker and then add everything else.
5. Pop on the lid, set the slow cooker on low and voila! 6 – 8 hours later, you’ll have a yummy dinner ready to serve straight out of the slow cooker. 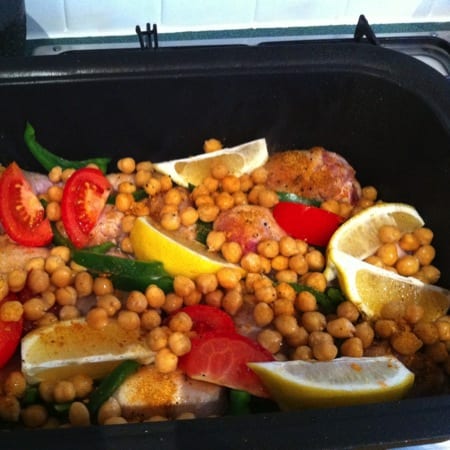 This dish works perfectly well on it’s own if you’re trying to cut down the carbs.  If you’d like to stretch the meal further (this is me) I usually serve with brown rice or creamy mashed potatoes.

In this photo, you’ll notice that I actually stirred fresh corn kernels through the brown rice as well – just to sneak in a few more veges (do you think I’m a stickler for veg?)

Have you used  a slow cooker before?  What’s your favourite thing to cook?