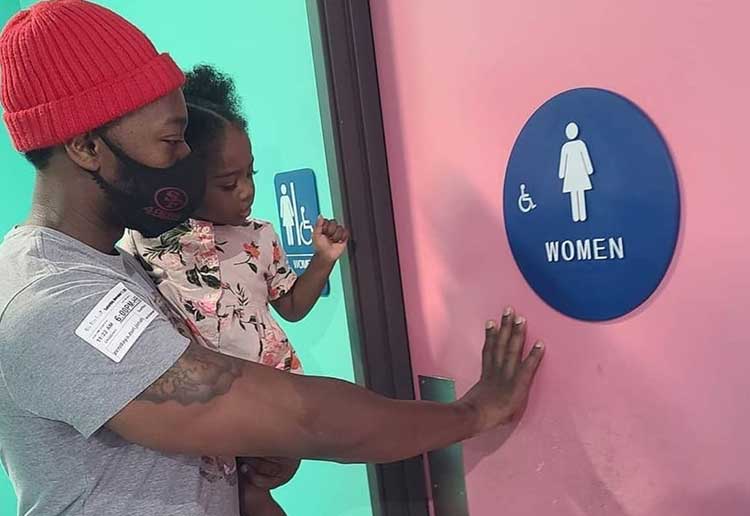 It’s a tricky situation – dad’s out with his young daughter and she’s busting for the loo. There’s no parent’s room nearby, so what’s the choice? Use the women’s or the men’s public toilets?

One dad says he’s no longer torn about which public bathroom to use for his daughter. He simply takes her to the women’s toilets. And he has a whole host of valid reasons why, and some tips for other dads who want to do the same.

“As a dad being out with daughters I never thought the bathroom would become as big an issue as it is,” explains blogger Muhammed Nitoto. “Usually we would go places and they have FAMILY bathroom which are meant for people with children but what I found was most places don’t have them and dads are left to decide between taking their daughters to the men’s bathroom or the women’s.”

Muhammed says initially when he was faced with the choice, he took his daughter to the men’s public toilets.

“Now I’ve been to a men’s bathroom millions of times but walking in with your daughter makes you look at it completely different. Men’s bathrooms are DISGUSTING. They smell like pee and nothing is setup for a woman or a person with a child. The changing table was right next to the urinal which means my child literally would be next to where men pee which she’s being charged.

“Not to mention that their are men going in and out while you’re in there. After doing that one time I decided I’d never take my daughter’s to the men’s bathroom again.”

The eye-opening experience left Muhammed without any doubt he would never take his young daughters into a men’s restroom again. “I use the women’s bathroom when I’m out with them. They are too young to go on their own so I have to go in with them.”

But, he’s come up with some respectful practices that mean both he and the women using the toilets feel more comfortable.

“I try to be as respectful to women as I can while doing so which consists of knocking on the door before entering and announcing myself. Making sure if someone is inside that they know I am a dad coming in with his daughter and making sure they are comfortable with that.

“Now once inside our stall I still am aware of the door and whenever I hear it open and someone new is coming in I announce myself again and make sure they know I’m inside with my child so that they aren’t surprised.

“Women’s bathrooms are so much cleaner and setup prefect just incase they have children. The changing station is usually insure a stall instead of just in the open and it’s always clean. As a girl dad I can’t help but want to protect my daughter’s from all things that aren’t for them and the men’s bathroom is 100% one of those things. Am I the only one? Ladies how does this make you feel?”

Dive into the comments and let us know what you think about this approach. How does your family handle this tricky situation?