Article Either Speak English Or Leave! 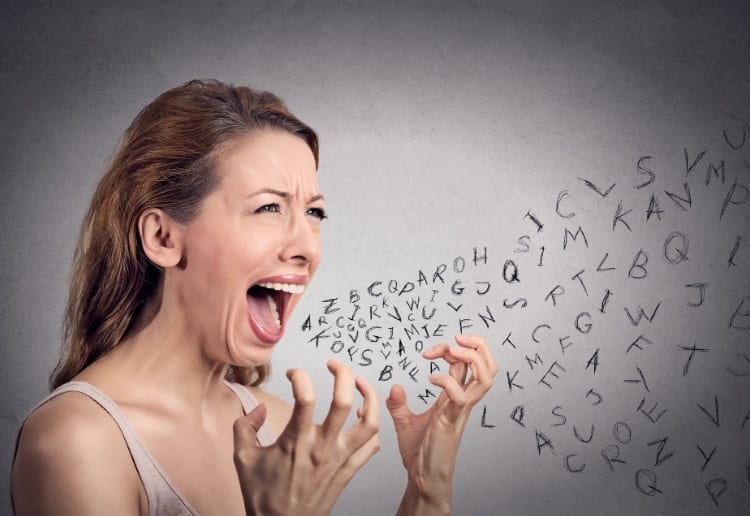 Foreign languages don’t usually get under my skin. In fact, I love the sound of them. The only exception being when I have visitors and everyone in the room is speaking in their native tongue – something which I don’t understand. There’s not even an attempt to speak in English.

I hate the feeling of isolation that I experience whilst my guests do this. Especially when they all speak fluent English and they know I can’t understand a word they are saying yet they still glance my way as though they expect me to contribute to their conversation somehow- a gentle nod or soft smile… something which I ran out of a long time ago.

It’s awful that they acknowledge the fact that I can’t understand them – without fail. Finally, when they realise that I’m not responding someone will always say in English ‘oh that’s right, she can’t speak our language’ before going straight back to speaking it once more. But what’s worse a feeling is when they start whispering.

The moment my in-laws lean in to their son’s ear and start whispering in their native tongue I know that somethings up. I mean it’s bad enough when everyone does it at their normal volume – but when their body language changes and everything becomes so secretive it strangely becomes all the more entertaining!

Why Are They Doing It?

It often makes me question their motives – are they trying to make me feel insecure, or do they want to try and start an argument? Alternatively do they genuinely feel that what they are talking about is so extremely private that not only do they need to discuss it in a foreign language, but, they need to whisper it! After all, I’m usually the only other person present when they’re doing this so whatever they’re discussing is something they don’t want me to be privy to.

As much as it drives me up the wall there is absolutely nothing I can do about it and it’s probably due to this very hopelessness of the situation that I can’t help but crack up whilst it’s happening. I can’t determine what’s more hilarious, the visual of my in-laws huddling up with my hubby trying to whisper as closely and quietly as they can – or the simple fact that doing so around me in a foreign language is just so pointless. I mean either way I’d have absolutely no clue what they were discussing!

Save The Secrets For When You’re Alone

Besides this, why can’t they just wait until they have their son alone before discussing private matters? He’s at their house practically every second day and they call him a few times a day so couldn’t they simply save the conversation for a more private time with him.

Admittedly my hubby does try to get them to speak in English when they visit. Although he himself often ends up speaking their language as well whenever they do come over, which only adds to my isolation.

I don’t know if this is just me being intolerant or nosy or if it is genuinely rude to go to someone else’s home and speak in another language, which singles one person out when everyone speaks fluent English. What I do know is that my uncontrollable laughter during these times is attracting the most confused looks from my in-laws, which in turn only makes me laugh even harder!

It probably sounds wicked that I get a cheap thrill out of their confusion, but the harder I try to compose myself and contain the laughter, the louder it erupts from my belly until tears are rolling down my face and the only time it reduces in its ferocity is finally once I’m gasping for air… but by then I’ve already made them feel uncomfortable and I have completely ruined their moment.

Obviously, I can’t force these people to see how their behaviour makes me feel. I’ve tried to encourage a change for over a decade now without any results. Maybe it’s alright for me to give up trying to foster a sense of understanding between us and just allow myself to laugh at the situation. There’s nothing stopping them from going home if they can’t tolerate my laughter, besides, I didn’t ask them to intrude anyway!

At least I’m laughing at conversations I don’t understand. Just imagine how much more awkward things would be if I took the time to learn the language and then began actually replying one day!

You Don’t Need To Speak The Same Language To Communicate

Having said all of this, one of my closest friend’s mothers doesn’t speak English. Yet her and I still communicate wonderfully whenever she visits me with her daughter! We make an effort to try and understand one another and although she speaks to her daughter in their native tongue, it’s never to isolate anyone else. There’s still warmth, love and the intention of being transparent. Even when we have no real clue about the verbal aspect of our interaction, we both feel what one another is trying to convey and I love that about her!

You don’t necessarily need to speak the same language to make another human being feel included – you just need to have the intention of welcoming them into your conversation. We can tell when we are wanted and when we most certainly are not. Anyone can show kindness, love and respect without ever needing to speak a single word of the same language.

Has this ever happened to you before? How would you respond? Tell us in the comments below.