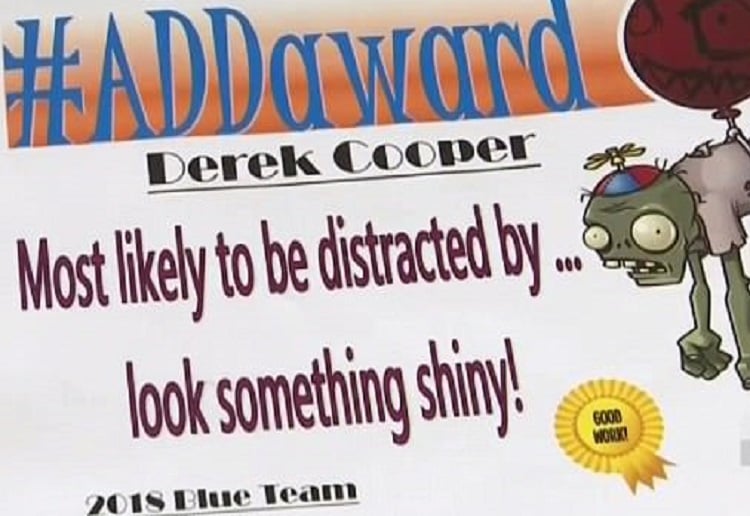 A teacher who gave a 13-year-old student an ‘ADD award’ at school sparked outrage from the boy’s mother.

Tera Cooper was in shock over the award that a teacher presented to her son Derek, who is diagnosed with ADHD, in front of his seventh grade class.

The certificate titled #ADDAward has the words: ‘Most likely to be distracted by… look something shiny!’ accompanied by a zombie being held up by a balloon and a little gold ribbon that says ‘good work’. 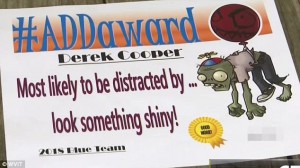 ‘He had tears in his eyes. He’s embarrassed because he had to accept it in front of his entire class,’ Ms Cooper said in an interview with NBC Connecticut.

Ms Cooper said Derek had told her that a couple of other students were given the same #ADDAward on Friday.

Derek was also given two other awards from the teacher, one for being the most improved in social studies and another titled ‘#BermudaTriangle’ that says: ‘Most likely to borrow stuff and it never coming back!’

‘I don’t know if she thought it was funny but it’s not funny. She’s the teacher. It’s supposed to be a safe place,’ she said.

Ms Cooper said by drawing attention to the incident it will ‘hopefully make change. Make the administration more involved in what teachers are doing and protect the students from having to deal with something like this in the future.’

This story made me remember that in grade six my then 12 year old got an award for “most selective hearing” at the end of year celebrations.