Article Amanda thought she was just bloated, friends say she had lost weight 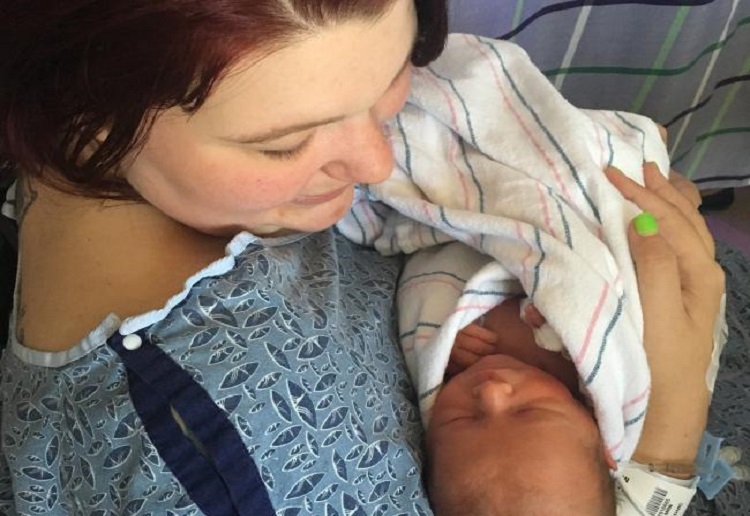 Mum reveals shock of giving birth to her baby boy a day after finding out she was pregnant.

Amanda Francis, 26, was stunned when doctors announced she was two months pregnant in July, but just 24 hours later she was in labour, reports News.com.au.

Despite taking six pregnancy tests at different stages, they all came up negative.

The pastry chef from Rocky Hill, Connecticut, USA, thought she was “just fat” or “bloated” while her friends claimed she had even lost weight.

Baby Kellin was born on July 20 and friends rallied together to provide the baby essentials.

Three weeks ago, the new mum returned to her hometown to look for work and day care for her surprise bundle of joy.

Amanda said: “When I first found out I was pregnant, I was shocked. I always thought that pregnancy would be a pretty obvious thing.

“I was scared about the idea of giving birth. I was confused and in tears. I was happy, because I’ve always wanted kids, but I didn’t exactly expect it to happen like this.”

Amanda said: “I felt a little bloated, but I had actually lost weight. I had been trying to see a doctor for a while, but it kept getting put off. I didn’t think there was anything serious going on.

“The only noticeable symptom I had was my missed period, which was what led me to take pregnancy tests.”

“I did have a strange craving for Chipotle almost every day. Now I don’t care for it. I also only wanted to eat things that were cold. Fresh fruits and veggies, salads, ice cream. I didn’t want anything hot. I also had a very difficult time finishing a meal. I was never really hungry at all.

“As far as morning sickness goes, I was mildly sick for a couple of weeks, but I thought it was just a stomach bug because everyone at work seemed to be sick, as well. Luckily, I kind of had an aversion to alcohol while I was pregnant.

“It was funny that everyone commented how it looked like I had lost weight. I was eight months pregnant at the time.

“My boss was the only person who thought I looked pregnant. I laughing saying things like, ‘nope, not pregnant. Just fat.’”

It was during a visit to her primary care doctor, who ran blood test, that Amanda was told she was two months pregnant.

The news was a shock, but Amanda, who has always wanted kids, felt she had time enough to prepare.

She said: “I found out a day before I had Kellin that I was supposedly two months pregnant.

“That night, I started having what I thought was cramps and some spotting. The following morning, I went into work as usual, but the cramps had gotten so bad I could barely stand.

“I went to the emergency room, convinced I was having a miscarriage.

“They did an ultrasound right away, and I remember hearing the ultrasound tech saying ‘My God’ under her breath, so I was crying and prepared to hear the worst from the doctor.

“I was absolutely in shock when he told me I was actually eight months pregnant and in labour.

“I couldn’t stop crying. I had no idea what I was going to do. It was certainly a crazy day.”

She added: “The only thoughts going through my head were that I wasn’t prepared, that I wasn’t going to be able to keep the baby and that I was going to have to place him for adoption.

“He was breach so they had to perform a C section. It was all so scary. Everything seemed to happen so quickly.

“One I had him I had decided that I was going to do everything possible to keep him and not place him for adoption.”

“The first thing I did was call my best friend Jess. I am beyond lucky to have a friend like her. There’s no way I would have been able to get through this without her.

“It’s definitely been a little bit of a struggle since becoming a mum. I had no idea how to take care of babies, or how to parent at all.

“There was definitely an adjustment period, but I’m starting to get the hang of it.”

“One of the strangest things is looking back at the time I was pregnant and realising all of the crazy things I did,” Amanda added.

“I fell down a flight of stairs while holding my cat at five months pregnant, sat for a five hour tattoo session at six months, and at seven months, I went on a week long trip to Virginia with my friend Jess.

“We drove overnight for 14 hours to get there. While we were there, we went hiking and I decided I wanted to climb some rocks.

“There’s a really great picture of me crouching on top of a rock I climbed, and I love showing it to people and pointing out that I gave birth a month after that picture was taken.”

What a beautiful surprise!