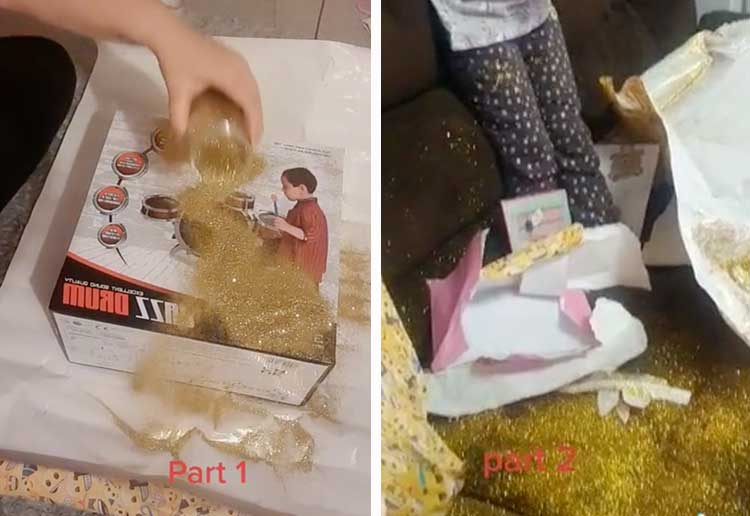 A cheeky aunty has pranked her sister with a noisy, glitter-filled gift for her niece, after she was specifically asked not to buy the present.

Hannah Sewell said her sister told her not to buy a drum kit for her niece’s birthday gift – so she bought her one anyway.

“When mum says no to a drum kit, you get the niece a drum kit,” Hannah says. But not content with going against her sister’s wishes, she took the prank even further by filling the gift and birthday card with glitter. Because we all know that glitter is the root of all evil.

Hannah shared the video to TikTok, which has been viewed more than one and a half million times. And the comments are brutal.

“Nah sorry, she might be cool with it, but boundaries are being crossed,” one person wrote.

“Honestly if someone did this to my kids I wouldn’t accept gifts off of them again,” said Naomi Jordan.

“So not only do you buy her kid something she said no to. You’re now gonna give her extra mess to clean up that’ll take weeks,” wrote another follower.

“You wait till you have kids, their mum will take revenge to a whole new level!”

‘Pay back won’t be good’

Hannah eventually replied with a follow-up video of her niece opening the gift – and let’s just say all went according to plan.

Her niece opened the present on a brown couch, which ended up completely covered in gold glitter.

Hannah admits her sister still loves her, but ‘pay back won’t be good’.

What would you do if your children’s aunty did this? Let us know in the comments below.