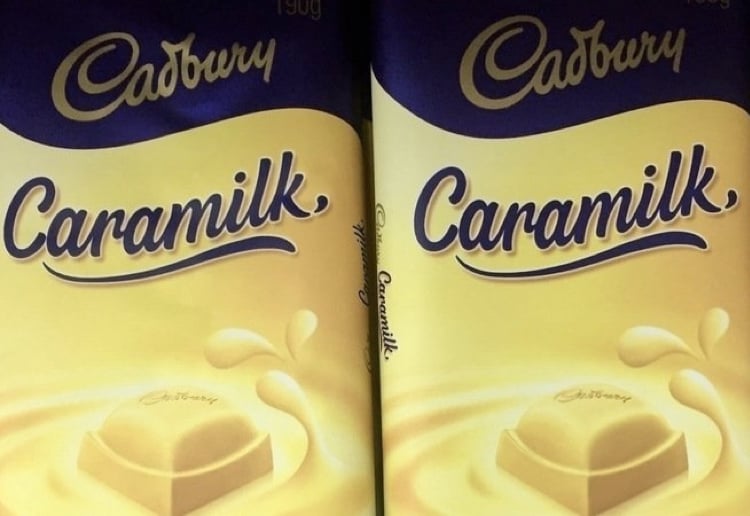 The milky, caramelly chocolate bar caused a major frenzy last year when Cadbury resurrected the chocolate for a short time. It flew off the shelves and popped up on eBay for exorbitant prices.

But then it disappeared again and fans were left mourning its gap in the chocolate world.

We reported the bad news that Cadbury confirmed that “Cadbury Caramilk is a special edition and we are no longer making it.”

Internet celeb, Christian Hull, was so gutted by its disappearance that he even launched a petition to make the white chocolate caramel block “a permanent thing”.

And it seems like the chocolate Gods may have heard our plea.

A ray of caramel-flavoured sunshine has just burst out into the darkness and we have just had confirmation that the 20-year old Caramilk is definitely coming back.

Cadbury has confirmed today that Caramilk will once again appear on supermarket shelved from 2 October, as a response to much pleading from their caramilk-loving customers.

“We’ve listened to the tens of thousands of Aussies asking us to bring Cadbury Caramilk back,” Cadbury marketing manager Katrina Watson said.

“We couldn’t ignore their passion for our golden chocolate block, so we’re proud to be bringing it back.”

Those not able to wait two weeks, can get their pre-launch fix on the Cadbury Joy Deliveries store on eBay. 500 blocks of Caramilk will be available online from this coming Thursday, with free delivery (yay!) but limited to one block per customer (boo!).

There has been much speculation flying through the internet about when the chocolate will once again be available.

In a leaked post on facebook, an announcement shared that the heavenly Caramilk will appear in-store IGA and Ritchies Supermarkets from this coming Friday 27 September. 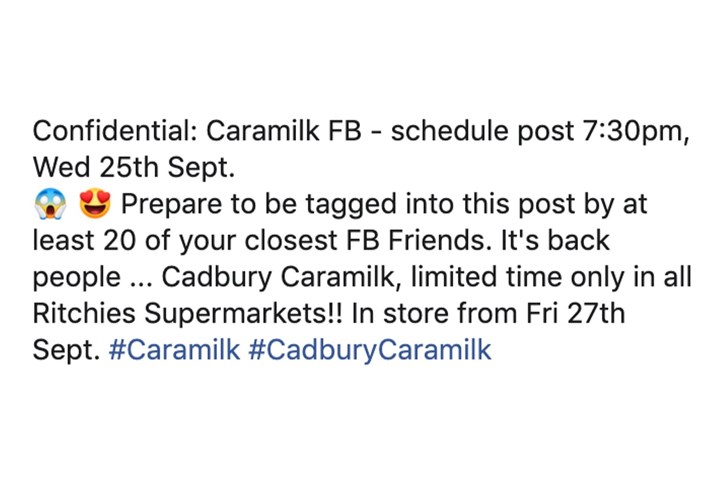 In another source, Jamie from The Grocery Geek – an independent Australian products review group – spoke to news.com.au and said he’d received a reliable tip that Caramilk will be back very soon.

The Grocery Geek first shared the news with his facebook followers, announcing that the beloved chocolate would return later this month.

“It is strongly rumoured that Cadbury is re-releasing its very popular Caramilk later this month…. stay tuned! — thanks to ‘S’ for the heads-up,” he posted.

This obviously caused an online riot with comments flying in, with chocolate lovers expressing their delight

“I’m getting ready to put my stretchy pants on,” one comment read.

“I’m about to get fat again,” said another.

When the cult-ish chocolate bar was brought back last year, it’s release was marred by a nationwide recall of Caramilk after “small flexible pieces of food grade plastic” were found in the product due to a “machinery fault”.

In a statement, a Mondelez International spokesperson said Caramilk was never intended to be a permanent part of its range, but “never say never”.

“While there are no current plans in place to make Cadbury Caramilk, we have been overwhelmed by our consumers’ response to the product and as one of the world’s largest snacking companies, we are in the business of bringing our consumers more products they love,” it said.

We expect the official announcement from Cadbury any day now. Watch this space….

Are you excited about the return of Caramilk? Tell us in the comments below.