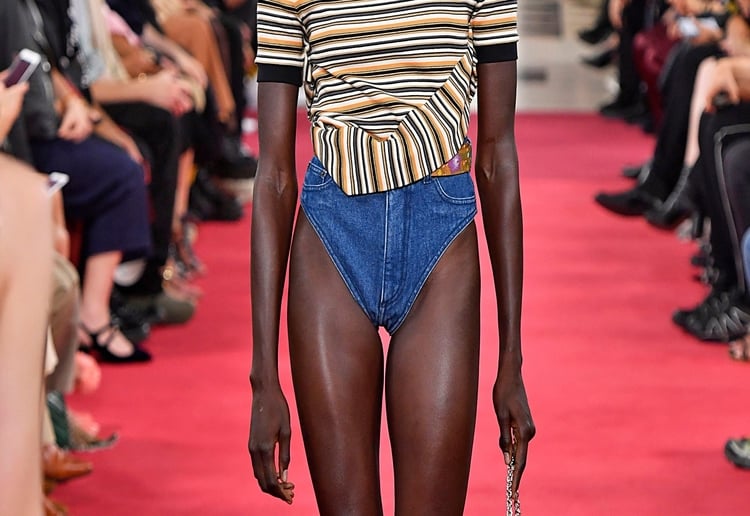 French fashion brand Y/Project has combined the wardrobe staples of denim and underwear to create a clothing item that has rocked Parisian runways. While the high-waisted, zip fronted mini shorts aren’t officially undies, they do look suspiciously like them and are raising eyebrows for their $470 price tag!

The Sun reports that responses to the shorts have been met with a mixture of shock and disgust online, labelled ‘ugly’ and ‘horrible’, but the fashion community have other ideas. Canadian e-store SSENSE even dedicated an entire post to styling the denim undies (let’s be honest, that’s what they are). “Two words: denim panties,” their post read. “The SSENSE editors show you five ways to take your Canadian tuxedo to the next level. These ‘brief-style’ shorts can be worn under or over pants, meaning they’re far more versatile than what you’d traditionally expect from a pair of briefs. Underwear doesn’t need to stay ‘under-there’.” Unfortunately, we have to say we disagree…

SSENSE’s post received over 9000 likes in just two days with shoppers unsure who would be purchasing the shorts. “Chafing is great…” said one Instagram user. “Two words…yeast infection,” said another. Although we think these shorts (denim undies) take things a step too far, it seems customers disagree, with many sizes already sold out!

These definitely aren’t the school-run appropriate shorts we had in mind, but if you love an unusual clothing item and have $500 to throw around, why not give these denim undies a go?

Would you be brave enough to try these high cut denim shorts? Let us know in the comments!