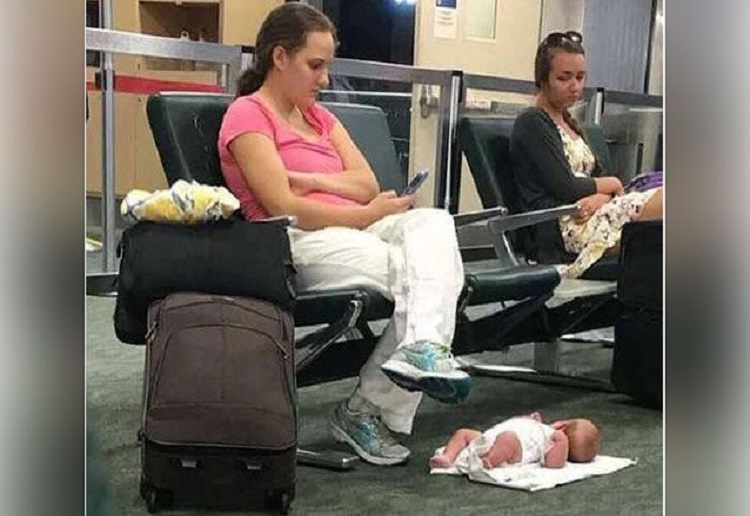 An exhausted mum shamed for texting while her baby lay on an airport floor, has defended her actions.

The caption on the viral Facebook post, read “Albert Einstein said, ‘I fear the day that technology will take on our humanity… the world will be populated by a generation of idiots’.”

The mum says her privacy was violated when the picture, which went viral, was taken at a Colorado airport last year, mother of three Molly Lensing warned others against knee-jerk shaming on social media without context, reports Yahoo.

She explained how she had spent 20 hours sitting in airports with a two-month-old baby that day, and with tired arms from holding her infant for hours, she placed her child at her feet fearing she might accidentally drop her.

“We had the unfortunate luck of being stuck in the middle of the Delta computer shut-down,” Ms Lensing told The Sun.

“Anastasia had been held or in her carrier for many hours. My arms were tired. She needed to stretch. And I had to communicate with all the family members wondering where the heck we were.”

She said the viral photo made her a target for abuse from people who identified her by name and contacted her to shame her as a “bad parent”.

“Here’s to all the millennial mums who have been shamed for being normal!” she wrote on her Facebook page last week.

The mother of three said she strived to be the best mum she could be, and knew within herself she was raising her girls the best she can.

How about we just STOP judging parents full stop?!