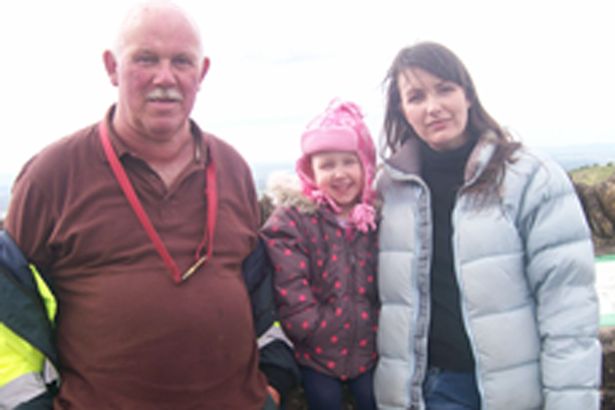 Helen Fitzsimmons, 40, gave breast milk intended for her one-year-old son’s to her father Arthur after he was diagnosed with cancer.

The Mirror reports, Helen’s dad Arthur had already been fighting myeloma cancer for four years when he was told he also had prostate cancer in October 2013.

After tentatively approaching the subject with mum Jean, Arthur told Helen: ‘Anything is worth a go.’

Helen, of Cheltenham, said: “The first time dad tasted my milk from a glass he drank it down in one go. He looked at me and smiled, then said ‘this tastes fine’.

“I know there are some people who may find this all a little strange but when someone you love is suffering you would do anything to help them.

“I’d found a way to help my dad and I took it. It gave him hope and he lived 16 months after being diagnosed with prostate cancer.

“That was a year longer than we expected after that and I’m sure it was my breast milk that helped.”

Helen, who was breastfeeding her son Cassius was just a year old, starting trawling the Internet for treatment and found ground-breaking research into the power of breast milk.

Research has shown that it boosts the immune systems and babies that are breast-fed have lower blood pressure and are less likely to be obese in later life.

Swedish scientists discovered in 1995 that a protein in the milk appeared to destroy cancer cells in the laboratory.

Helen said: “It wasn’t something I decided on a whim. There was clear medical evidence that giving dad my breast milk may help him.

“Cassius was only a year old and I was still feeding him so what harm could it do? I started expressing and freezing, then taking monthly supplies down to my dad in Devon.”

“I wanted him to drink more so asked a friend to start donating her milk too and he was soon taking 3fl oz. Incredibly, his protein levels then actually started falling.

“He even joked mine was sweeter after tasting both.

“There’s nothing to suggest that anything else other than the breast milk caused this to happen.

“In fact, when he later dropped to having just half an ounce of breast milk a day the levels raised again.”

Helen said: “I truly believe that dad lived an extra 12 months because of the breast milk.

“Of course we can’t prove it medically but it gave him hope – and hope is so important in battling cancer.

“Dad had no qualms about taking it and knowing there were no side-effects was a bonus.

“He told me he was grateful and hoped that others would benefit from our story. That’s why I’ve decided to tell people about our experience.”

She said: “My only regret is that I didn’t realise the benefits of breast milk earlier.”