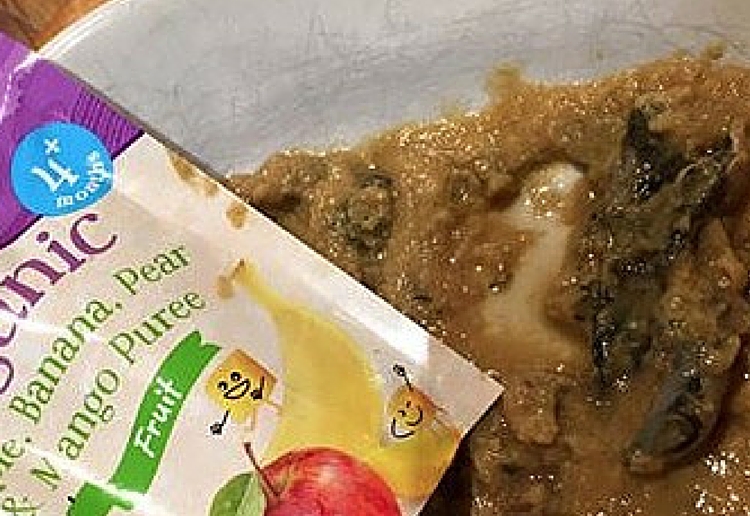 A batch of Macro Organic baby food has been pulled off shelves at Woolworths supermarkets nationwide after a Brisbane toddler suffered suspected food poisoning after eating it.

Using Facebook to warn others about her toddler’s reaction to the food and the mould she found hiding within the contents, mother Nikki De Bondt, said her children, “gagged and almost vomited” after tasting the Baby Macro organic apple, banana, pear and mango puree.

“OMG it was gagworthy”, the mother wrote of what she discovered when she cut open the pack and squeezed out the contents.

Nikki’s post, now shared more than 50,000 times, was updated after one of her children spent the night vomiting, “UPDATE: ELKA UP VOMITING ALL NIGHT. DO NOT GIVE TO YOUR CHILDREN”.

The reaction to the photo of the mouldy baby food has shocked people on Facebook, with many users saying it was “disgusting” and “revolting.”

“I took it back to Woolworths where they have agreed to send it away for testing,” Nikki said. “The contaminant has been sent off for testing and the entire batch has been removed from the shelves.  Woolworths have been keeping me up to date regularly. Will keep everyone posted when results come back.”

A Woolworths spokesman confirmed the batch in question had been taken from shelves following the woman’s complaint.

“We have been in touch and begun an investigation with our supplier. We have also taken from our shelves products from this batch,” the spokesman said. “Woolworths takes the safety of our products very seriously and was concerned by this report from one of our customers.  We always encourage any customer who has a problem with any Woolworths products to get in touch so the issue can be investigated.”

Woolworths had referred the case to the Queensland Health Department to investigate and the supplier had been notified.