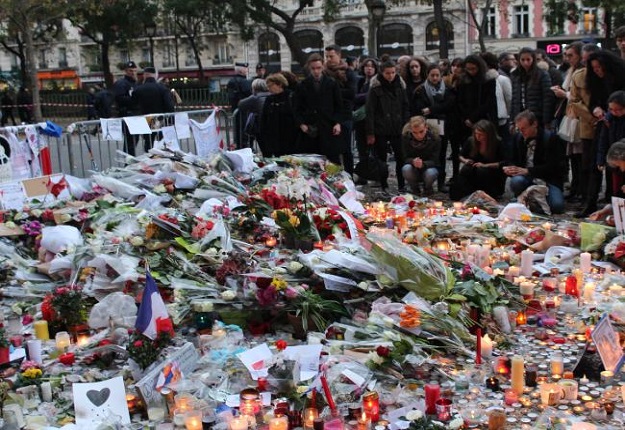 A hero who helped a pregnant woman clinging for life outside the Bataclan theatre in Paris, has spoken out about their ordeal.

The woman was hanging from a window ledge calling “Help, I’m pregnant” as gunfire erupted. The man who pulled her inside, said he “took advantage of the moment a gunman chose to reload to escape when he saw the woman begging people down below her to catch her if she jumped”.

“I held on for five minutes and then the pregnant woman, who was exhausted, asked me to help her get back inside. That’s what I did.”

He then returned to his hiding place and “felt the barrel of a Kalashnikov against my leg and a terrorist said: ‘Get down from there! Come and lay yourself down!’ It was here that the hostage crisis began.”

We are unsure how he escaped but we’re amazed by this mans care and compassion.

Another victim,  Gregoire Philonenko, was watching the band with his 19-year-old son said his prosthetic leg saved his life.

“The terrorist arrived, he touched my leg. He just pushed it slowly just to see if I resisted — it meant if you were alive, he shot you. He tried to see if I was alive or dead. It’s only thanks to my leg that I’m still alive,” he said.

Mariesha Payne, from Perth in Scotland, was at the Bataclan concert hall with a friend. They were hiding in a cellar for three hours.

“It was just a stampede and screaming and gunfire. Nothing felt safe at that moment in time… we just ran to the very back of the cellar and crammed ourselves into the smallest space and just waited in darkness.”

Italian businessman, Massimiliano Natalucchi said he crawled to safety in between pretending to be dead, to the first floor, where he hid in a small office full of around 50 people.

French model Amaury Baudoin posted an open letter on Facebook telling Muslims to have no shame.

MUSLIMS (AROUND THE WORLD) – HAVE NO SHAME !
Whatever your religion may be or whether you’re an atheist, the danger we face lies in division and fear of our neighbour.

MUSLIMS AROUND THE WORLD COME TOGETHER!
Don’t allow yourselves to be confused with a band of thugs. If you allow this to happen they will have won. Make yourselves heard, make it known in a single, unified voice that you don’t stand with them. I’m calling out the Grand Mosque of Paris and to all the muslams of France and of the world to come together in ways that will make history.

“I found myself trapped like a rat. I was among the first people in the crowd to flee and very soon people started piling in. We stayed like this, about fifty of us cramped into 15sq m and seven of us in the 1sq m of the toilets. I knew that if the killers came to where we were we would all be dead due to our inability to move around,” he wrote.

“I’ll spare you the details of that long, anguished wait, screams and sounds of firing in the theatre, the wounded, the loss of hope and then its return when the firing ceased and a long silence settled in. There are so many things which crossed my mind, above all the idea of death, death at 24 …”

Amazing stories of survival, with many more to come I am sure.