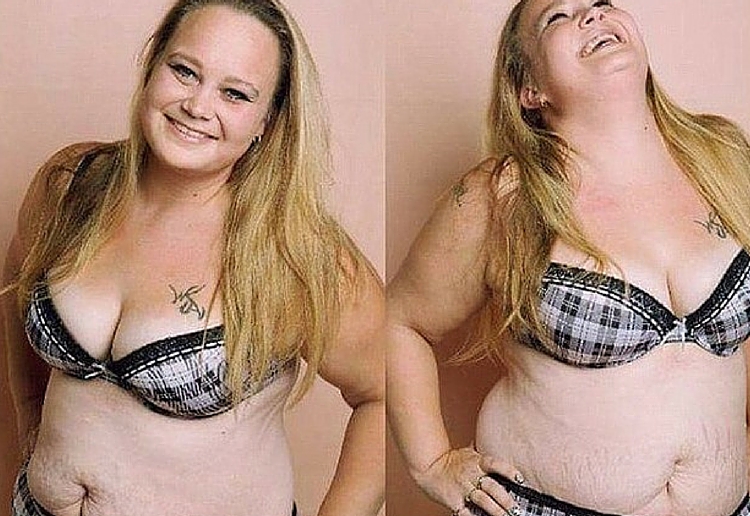 Social media has been flooded with images of thousands of women who are proudly showing off their bodies and make up free faces using the hashtag #LikeAQueen.

The hashtag trend was inspired by Perth based blogger Constance Hall, who shared a photo of herself on Tuesday and put the call out for mothers to share photos of themselves to boost their self-worth.

In a mere three hours, the post had been liked close to 20,000 times, been shared 1,500 times and has garnered over 1,400 comments from inspired women and mothers worldwide.

Immediately after Constance shared her ‘call to action’ post, women started to share photos of themselves using the positive hashtag.  Many of the photos were also accompanied by inspiring and confident messages.

‘It took me ages to work up the courage to share a pic of me in my AWESOME new bathers, but a few days ago I took the leap after deciding I didn’t care what others think,’ one woman wrote alongside a picture of herself in a one-piece. ‘No one commented what a fatty, maybe they thought it? But who cares what they think! I like cake, and I like to swim so great bathers are a must.’

Another woman said that although she was embarrassed to wear a bikini while pregnant, the post helped her feel confident to now do it.

‘I was so used to being tiny, but now with my 3rd baby it’s time to show it off as the beautiful thing it is [sic]!’ She wrote.

One mother shared a photo of herself with her children on the beach and explained how she has been constantly judged in the past due to her body.

‘I have been it all…the boys used to sing “thunder, nana nana naaaa” as I walked down the locker room corridor in high school…then after I had my 2 babies I worked hard and was called disgustingly skinny, skeletor etc, you can’t please everyone, just #pleaseyourself [sic],’ the woman wrote.

Other women shared stories about their lean frames.

‘This is me deemed to skinny ugly and teased as a kid and then in adulthood I’m still floored when people openly tell me I should eat more pies or call you a skinny a**e,’ one of the ladies wrote.

‘Gorgeous picture! You’re doing so much for so many women with gestures and honesty like this,’ one fan said.   ‘Reading your page has totally uplifted me!’ Another mother agreed.

‘Scars, stretch marks, rolls and handles #LikeAQueen First time ever showing this much, to empower the beauty of a woman’s body in all shapes and sizes!’ A lady said.

Constance has made headlines over the past month with her amusing and raw post on the realities of parenting and being a mum.

‘Like a queen you guys, she’s flawed, she swears, she eats the cake!!’ She said in the post. ‘She has a past and she owns that s**t, she’s skinny, curvy, flabby, muscly and she loves it. Because she’s a f*****g queen. Love yourself the way you want your daughters, nieces, friends kids to love themselves [sic].’

Sharing an image of herself, the mother-of-two snapped a photo of her holding her baby whilst she was wearing her underwear and uploaded it to the post.

The call for action for others to do the same and be proud of their body was declared at the end of the now-famous post,

“Now I nominate you, all of you, to take a picture of yourselves, a picture that society has deemed you unfit for, because your too old or skinny or fat or you’ve had too many kids or not confidant enough or for whatever reason you have been made to feel like you don’t deserve to love your body or your self [sic],”

‘Hashtag ‪#‎likeaqueen‬ and yes, nominate your spectacular queens friends. And let us sit around drinking self worth a queen vibes from a champagne glass. Because our royal bodies deserve so much more ‪#‎constancesqueens‬ #likeaqueen [sic].’