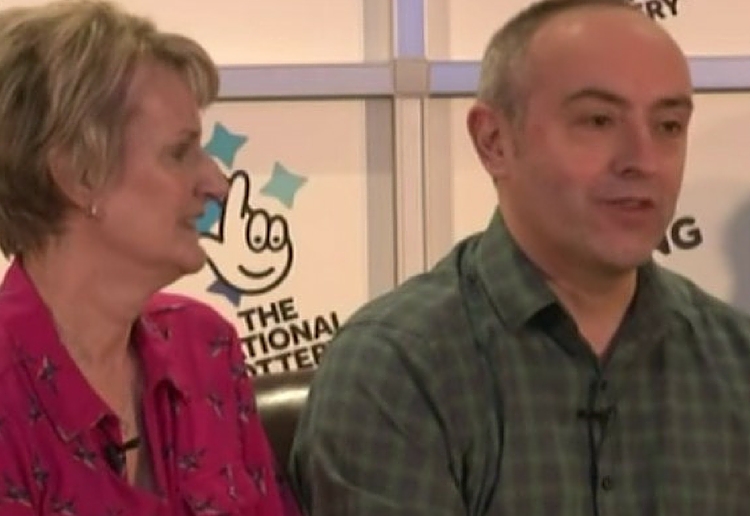 The neighbour of the biggest ever Lottery winners in Britain won his own lottery windfall in ten years earlier.

David and Carol Martin discovered on Sunday morning that they had won half of the £66million Lotto prize money – catapulting them to the top of the Lotto rich list.

The couple, both 54,  have won a cool £33 million dollars and revealed to the Daily Mail that they stared at each other silently for a full five minutes in shock trying to take their win in.  They then had lots of cups of tea and later phoned their 26-year-old daughter Lisa, who is currently working in Australia, to tell her the good news.

Carol, who works at a local Boots chemist, said: ‘We just kept looking at each other and going “No, it canna be”.’

David, a mechanic and handyman, told the Daily Mail that he had some initial plans for some of the money:

“buy myself a nice pair of £200 brogues [shoes]’, a range rover and an automatic car for his wife.”

Meanwhile, it emerged that the Martins were not the first residents on their street to taste lottery success.

Next-door neighbour Brian Nichol, a computer operations officer, was part of a work syndicate who scooped half a million pounds on the lottery in 2002.

However, Brian only won 9,400 by the time all members of the syndicate were paid, which certainly pales in comparison to his neighbours’ lucky windfall.

Brain told the Daily Mail that “the couple were lovely people who deserved to win – but said they lived so quietly that he hadn’t even heard a peep of celebration from their home.”

‘You’d have never known though, I’ve not heard any screaming from their house. They’re pretty quiet people and don’t go out too much, but David is a keen golfer down at the course.  I’m very happy for their good fortune.”

The Martins said at a press conference today that another of their first purchases will be a first-class ticket home for their 26-year-old daughter Lisa, who is working for a recruitment company in Australia.

The family have not been together for more than a year but the couple have offered to pay the plane fare home as soon as Lisa can arrange it.

The husband and wife said they hoped to be reunited at the weekend so that they can begin planning their futures at their ‘ordinary’ home.

David also revealed he was keen to help flood victims battered by recent storms, while on a personal note he spoke about going to a number of live sporting events.