Mother of murdered schoolgirl Tiahleigh Palmer has made a desperate public appeal for information about her daughter’s death and expressed concerns about her killer still being on the loose.

News.com.au reported twelve-year-old Tiahleigh’s badly decomposed body was found by fishermen on a riverbank at Pimpama on the Gold Coast — 40km from where she was dropped off by a foster carer at Marsden State High School — on November 5 last year.

Still no arrests have been made in relation to the murder.

Cindy Palmer spoke to media for the first time since her daughter’s death in a press conference Monday afternoon.

She said she had decided to speak out because she wanted to know what happened to her daughter and to prevent another family or “poor, innocent child” from going through the same thing. 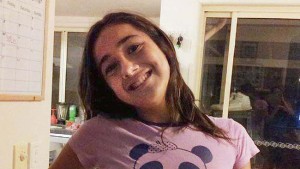 “We’re appealing for anyone who knows what happened to Tiahleigh to come forward,” Ms Palmer said.

“(It’s hard) knowing this could happen to another family and at any time while the person responsible is still out there.

“We definitely do need answers.

“It’s her birthday soon and she’s not even going to be able to be a teenager,” Ms Palmer said.

“Tiahleigh was a loveable girl, always loved mucking around.

“She loved dancing and couldn’t do cartwheels but tried hard.”

The last known sighting of Tiahleigh was at Marsden High School, where she was dropped off about 8.10am on October 30. She never made it inside.

Detective Superintendent Dave Hutchinson on Monday said there were fears the killer could strike again.

“We hope the person or people responsible can’t do this to another family or poor, innocent child,” Supt Hutchinson said.

“The person or people who (killed Tiahleigh) should know we’re not giving in.

“We have a team of detectives dedicated to finding out what happened so (the person[s] responsible) should never feel at ease”.

Supt Hutchinson said police had interviewed hundreds of people and that some knew more than they were letting on.

“We have spoken to people that we believe have more information than what their telling us,” he said.

“We’re reasonably confident that we have spoken with people who have information about what occurred to Tia at that time.” 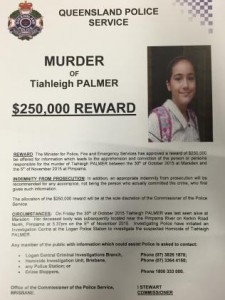 Detectives continue to appeal for any information.