A mother has divided opinion after raising concerns about a friend having sex with her partner while their children sleep in the same room.

The Daily Mail shared a post from an anonymous poster on parenting forum Netmums who said she was ‘disturbed’ that her friend was having sex in the same room as an eight and 10-year-old – and asked if she should say anything.

In the controversial post, she explained: “My friend says it’s fine – they make sure the children are asleep.

“But I am not certain that you can be sure, or that they won’t wake up and lie there wondering what is happening.
“She says it is no different to the third world countries where families all share one room, which I guess is true.

“However I feel really uncomfortable since I found this out because of the age of the kids.

“Part of me feels I should say something. 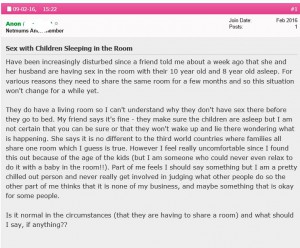 “But I am a pretty chilled out person and never really get involved in judging what other people do.

“So the other part of me thinks that it is none of my business, and maybe something that is okay for some people.”

Some users argue it is child abuse, while others admitted to doing it themselves.

One poster said “Both their kids are way too old, not babies.

“If one of these kids was to go into school and mention something to a teacher, social services may be contacted.”

Janette, a teacher, agreed she would have to seek advice if she heard about such a situation – or face an Ofsted investigation.

Another wrote: “I don’t see anything wrong with it. My parents lived in a one bedroom house for years and had two kids, me and my brother. I’ve never noticed anything and calling it abuse is just out of line.”

Another user admitted having sex with her partner on holiday – with their 13-year-old daughter in the room.

Kim wrote: “I think its totally wrong. It’s bordering on child abuse and social services would not be pleased. Sexual activity in the presence of a child is an offence. What if they wake up? Revolting and I wouldn’t be able to not say anything. There’s absolutely no need to do it in the same room so the fact they do is just disgusting .”

Psychologist Emma Kenny told The Daily Mail: “There’s nothing wrong with having sex. It’s important to maintain that intimacy in a relationship.

“Having said that you don’t want to upset [the children] and it’s best to keep personal intimacy separate to them.

“But would I be negative and criticise the parents being discussed in this post? No, I think they sound like loving parents trying to manage a difficult situation.

She added: “Having worked with victims of child abuse and seeing the devastation it causes to people’s lives, I think people should be very careful in what they’re suggesting.”