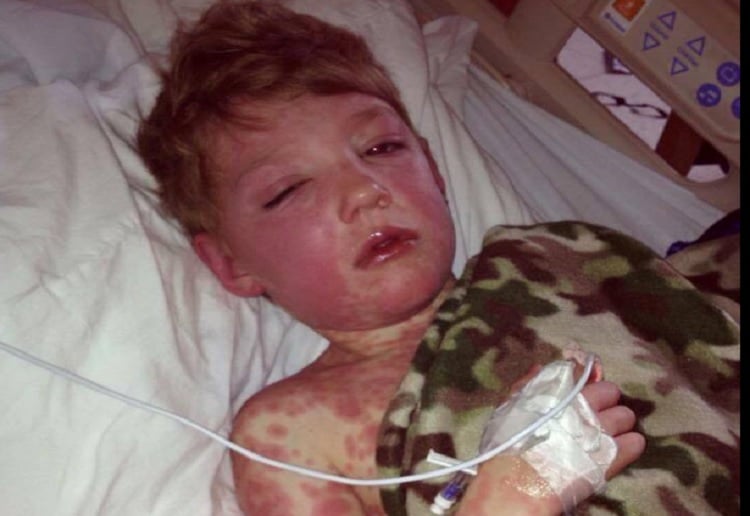 Mum heartbroken to realise she was giving her son the very thing that was killing him and had no idea.

Mandy Smith shared her sons story on the Love What Matters Facebook page. Mandy writes, “February 21st may be just another day to everyone else, but for me, It’s a day that will forever be burned into my head. On this day, 2 years ago, I picked Zachary up from school and he was complaining of poison oak on his foot and that he felt like he had dirt or something in his eye.

We put some cream on it and never thought much more about it. He went to stay the night with his nana that night and early the next morning, February 22nd she brought him back because he had started to break out in a red rash and he had been running fever.

I brought him to the ER in Monticello, shares Mandy, and they believed it to be some type of viral infection. So we got him some meds and went back home. It seemed with every hour that passed by he only got worse. The rash began to spread and completely cover his little body. His eyes were blood shot red, and his lips were bright red and were beginning to crack and peal. We knew something was not right so me and my mom brought him to Kdmc. It was there that a nurse practitioner told us that she believed Zachary had sjs (Stevens Johnson syndrome).

It literally burns you from the inside out. He had been taking a medication called lamotrigine (lamictal) for migraines he had been having. We never even thought what was going on with him could have been an allergic reaction because he had been on it for 12 days. So I thought surely if he was having some type of reaction to it then it would have happened the first night that he had taken it. We had even given him that medicine right before we left to bring him to Kdmc. I was giving him the very thing that was killing him and had no idea, shares a heartbroken, Mandy.

He was then sent to Batsons children hospital in Jackson where they admitted him. We were there for 4 days, and with every day that passed we watched him get worse and worse and still felt like we had no answers. We finally seen a dermatologist who did a skin biopsy on him and then she walked my mother and I out of the room and confirmed to us that he DID indeed have sjs and it had turned into tens. I will never forget her words to us when we asked if he would be okay. She said ‘I don’t know, he is a very sick little boy.’ Our hearts sank. They then told us that we would be going to another hospital. A burn unit that was more experienced with dealing with sjs/tens. So on February 26th we were then air lifted to Augusta Georgia to the doctors hospital.

We were only in the airplane for about 2 and a half hours, but that ride felt like eternity. By this point, it had gotten so bad that Zachary’s skin had began to blister and bubble up and was actually coming off. So he screamed and cried the entire ride. He was in more pain than you could possibly even imagine, and as a parent, there is nothing in this world worse than seeing your child hurt and be that sick and not be able to do a thing about it.

When we made it to the hospital in Georgia, the doctor met me as soon as we got there and told me their plans. He said that they would be putting him in a medically induced coma and have a machine breathing for him, and they would be doing surgery to remove his skin and then would wrap him in a material called biobrane while his new skin grew back under it. I told Zachary that I loved him and that everything would be okay, kissed him, and then I had to leave the room.

A few hours later they allowed me to come back into the icu room and see him. He had been put into a coma, was completely wrapped up from head to toe, and had tubes everywhere, with a machine breathing for him. I broke down. I was so overwhelmed and just could not believe that this was actually happening. The only question I could ask the doctor was ‘is he going to make it?’ And when his answer was ‘I don’t know’ that killed me even more.

I needed reassurance. I needed to hear ‘yes, he is going to be okay’ .. After being in Georgia for a couple days we ended up going to a hotel. We checked in and I went to my room. When I walked in I seen a bible laying out on the desk and was opened to John 9. So I started to read it. It was a verse about how Jesus had healed a blind man by putting mud on his eyes and then telling him to go to Siloam and wash it off, and when he did his sight was restored. It was then and there at that exact moment that I had received my reassurance. I knew this was the lord telling me, ‘I’ve got this, put your faith in me and I will deliver’ and that is exactly what he did.

Zachary’s body had been 90% affected. He also had infection in his lungs. He was very very sick but after being there a month he was alive, awake, and he was healing!

I hope these pictures don’t bother anyone, because in the beginning we never intended on anyone to ever see them besides family. He took what was our biggest nightmare and turned it into our biggest blessing. Not only did Zachary heal, but he has also had no long term complications from being sick.

We’ve met so many sjs survivors along the way and I see them struggle all the time from the aftermath of it, and it breaks my heart for them but it also makes us realize how blessed we are that Zachary has not had any problems. Never take your children’s health for granted because it can all change in a second. Zachary is our sjs warrior and we are so thankful to still have him.”

Last month we shared a story of nine year old, New Zealand girl, Valencia, who also suffered from SJS and also another case of SJS Three-year-old Joel Greaves, from Leicester.

What is Stevens-Johnson syndrome

Stevens-Johnson syndrome is a rare, serious disorder of your skin and mucous membranes. It’s usually a reaction to a medication or an infection. Often, Stevens-Johnson syndrome begins with flu-like symptoms, followed by a painful red or purplish rash that spreads and blisters. Then the top layer of the affected skin dies and sheds.

Stevens-Johnson syndrome is a medical emergency that usually requires hospitalization. Treatment focuses on eliminating the underlying cause, controlling symptoms and minimizing complications.

Recovery after Stevens-Johnson syndrome can take weeks to months, depending on the severity of your condition. If it was caused by a medication, you’ll need to permanently avoid that drug and others closely related to it.