Article Mums Are Coming Clean And Revealing Their Messy Homes 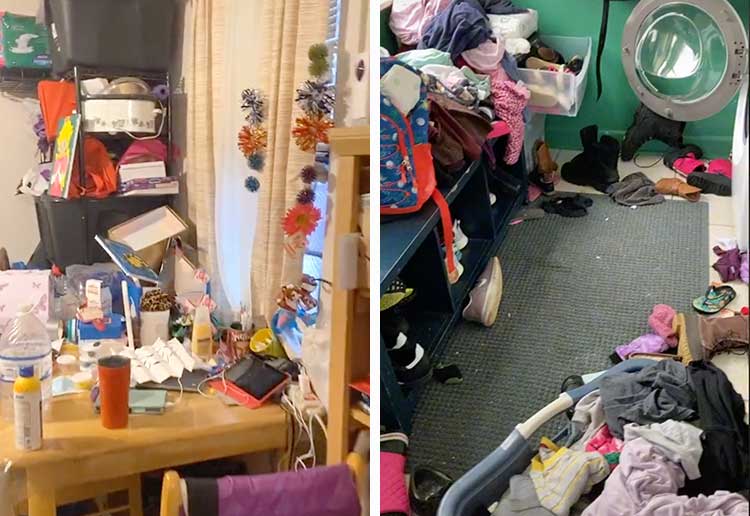 If we’re to believe social media, most mums have pristine homes, bathed in a beige aesthetic that somehow remain free of grubby fingerprints and food crumbs. News flash – this isn’t most mums.

And now the messy mums of social media are taking a stand and sharing their ‘real life’ homes, complete with laundry piles, dirty dishes and random, unidentifiable bits of food lurking in every corner. But not everyone is impressed with this new movement.

Now, I’ll admit, I like a tidy house. I vac twice a day, I can’t abide a dirty sink and beds are always made. But I’d never shame anyone who isn’t the same. Life as a mum is BUSY. And at the end of the day, if there’s a choice between finally having a cup of tea and a TV series binge in peace, or doing the dishes, I can totally get not choosing the latter.

Mums are using TikTok to show their ‘normal’ houses, so that other mums who aren’t the queens of clean feel like they’re not alone.

Using this voiceover, created by ItsWendy, mums are sharing clips of their homes: “I just want to show everybody what my house looks like. There are a lot of videos out there with all these houses that are absolutely beautiful, clean, pristine, aesthetic. Well … this is my house. So if your house looks like this, we should be friends.”

tired_mommax3, who is pregnant and has three kids under five, shared her home, saying ‘It’s been a rough weekend.’ And opinions became so heated in the comments, that she ended up turning them off. One commenter saying, “So you brag about your house being dirty cuz other people show their houses clean and beautiful? Not a flex.”

The mum responded in another video, saying her house is messy but not dirty, explaining there’s no bugs, dirt or mould. “I show my house messy so that other mums can feel ok about their houses. I don’t do it to brag about having a messy house, I just do it to show that life gets in the way. That video was posted just after my family got Covid. Then we got over Covid and we all had a cold.

“My toddlers aren’t sleeping at night, my husband works full-time during the day, I get zero breaks, I’m freaking 18 weeks pregnant … it’s ok to have a messy house.”

The ‘messy house movement’ has been adopted by hundreds of other mums, using the same voiceover to share the state of their houses.

It’s all in the name of sharing the reality of being a mum. Being right in the trenches, just trying to keep little humans alive. Sometimes all we can do is feed, soothe and love our babies, and cleaning isn’t a priority. And that’s perfectly ok.

Do you keep an immaculate or tidy home? Or are you happy to let the mess slide while you’re busy with the kids? Let us know in the comments below.