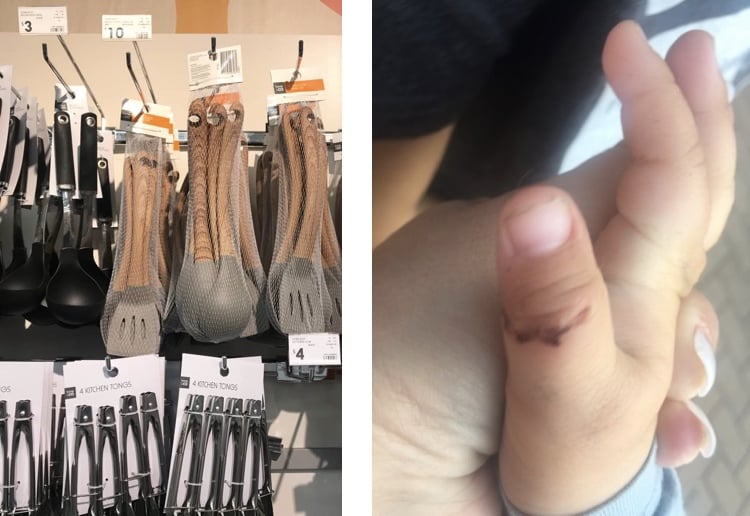 All this mum wanted to do, was equip her kids’ toy kitchen with fun utensils to enhance their pretend play experience. But her good intentions backfired when one of the Kmart accessories seriously injured her young son.

Mum of three, Emma, bought a small toy Kmart kitchen for her kids (aged 5, 4 and 2 and a half) to play with. She decided to equip the kitchen with those super cute kitchen utensils that are sold cheaply at the Kmart.

She picked out a mini-tongs for $2, thinking that it would be safe for her kids to use.

Emma shares:
“Today I heard this massive scream and I went running into the room to find the tongs stuck on my 2 and half year old’s thumb. He had picked them up and the little metal clip that slides down to hold them close had slid down and locked his thumb in.”

“He had his thumb in the middle down the bottom and that metal bit slid down and locked his thumb in there. Even though they opened, I couldn’t slide it up to close them as it was squishing his thumb and blood was coming out. It was very scary,” she said.

“I managed to get his thumb out without going to the doctors but it cut a big slice halfway around his thumb”, she explains.

Emma wanted to share a warning with other parents: “I’ve seen a lot of mums posting that they brought these cute tongs for there little one’s kitchens. But they need to know the dangers of them as they could have easily cut his thumb just about off.” 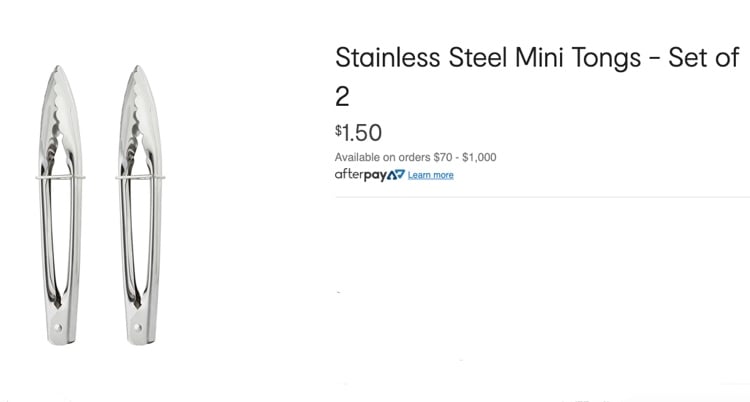 This wasn’t the first time a pair of tongs has injured a child. When my daughter was one years old, she discovered our mini kitchen tongs and had alot of fun opening and closing it. I’m a very risk-averse mum but didn’t think twice about letting her play with this.

And then she suddenly started screaming and blood was gushing everywhere. The base of the tongs had gripped and badly pinched the top of her finger and had made a very deep cut.

I was petrified as the blood just wouldn’t stop and I panicked and called an ambulance. The paramedics dressed her finger and it eventually stopped bleeding.

But it was a good lesson for me. Kitchen utensils are not kids’ toys and parents should rather buy kitchen implements that have been made specifically for children to play with.

Has your child ever got injured by a kitchen utensil or something similar? Share in the comments below.