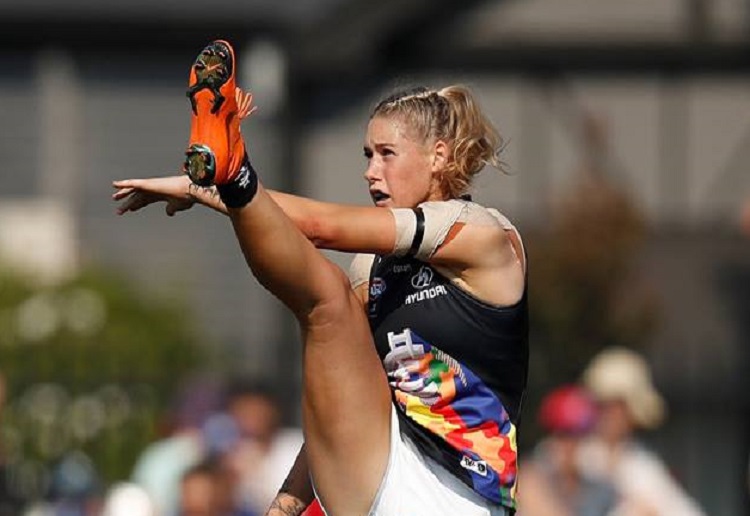 An image of an AFL Women’s star was controversially removed from Twitter after it received inappropriate comments by online trolls.

The image of Carlton’s Tayla Harris, captured in a match against the Western Bulldogs, attracted so many offensive comments 7AFL removed its post.

‘The original purpose in publishing the image was to celebrate the power, athleticism and skills on show in Calrton’s thrilling win over the Western Bulldogs,’ the message read.

‘The image attracted a number of comments, some of which were inappropriate and offensive. As a consequence we have removed the image and the comments.’

Fans immediately questioned why the image needed to be taken down and eventually 7AFL posted it again with an apology.

“We’re sorry. Removing the photo sent the wrong message. Many of the comments made on the post were reprehensible & we’ll work harder to ban trolls on our pages.

“Our intention was to highlight Tayla Harris’ incredible athleticism and we’ll continue to showcase and celebrate women’s footy.”

Why are we still fighting the same fight?

I think this post on Humans in Melbourne Facebook page sums it up well.  I certainly couldn’t say anything better.

“This photo has caused a lot of controversy because some men don’t know how to treat women with respect.

“Sometimes social media makes it feel like it’s high school again where the class clown is trying to get a laugh from everyone. Or when little boys didn’t know how to talk to girls so they would tease them.

“Worst of all, some of the misogynistic comments that have been left on social media are bloody disgusting. So much so that the original post by channel 7 got taken down.

“Tayla, I am sorry you’ve had to put up with this and to all the women everywhere I am so sorry that this still happens.

“Not all men are like this, I swear, but many still think it’s ok to treat women this way…

“This is not me virtue signalling, I don’t need to do that. When I see stuff like this I think about the kind of world I want the women around me to exist in, and it doesn’t look like this. If I am lucky enough to have a daughter one day and someone spoke to her the way these men have spoken to/about Tayla, I’d be livid.

“The truth is Tayla would out kick, out mark, out run and out tackle most of those men making the comments and that’s why they comment. They are threatened by a girl and they see an opportunity to sexualise her so they feel in control of the world they are presented with in 2019.