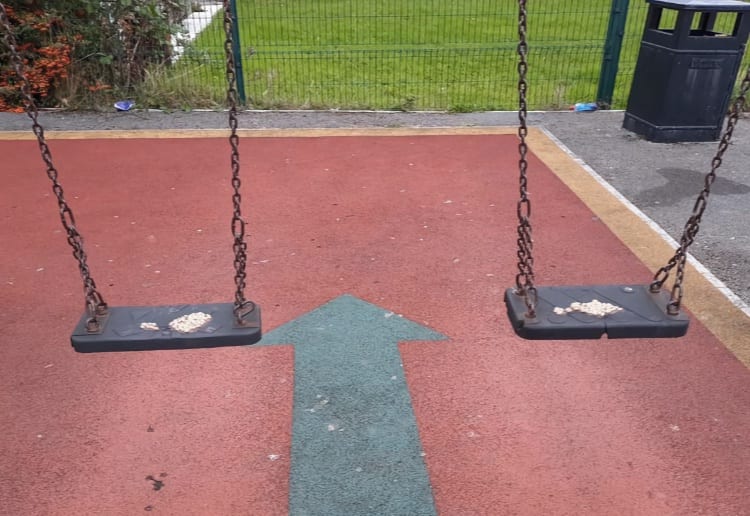 Parents have been left bamboozled after discovering a bizarre form of vandalism in their local playground.

A mum has taken to social media to share that she discovered piles of baked beans all over the playground equipment in her local park.

While the incident happened in the UK, we wouldn’t be surprised if this weird act of vandalism is copy-catted in our own playgrounds.

The mum visited the Chapel Street playground in Swanwick, Hampshire, in the UK and noticed that piles of saucy baked beans had been dolloped all over the roundabout, swings and basketball court.

The mum said that she didn’t understand the significance of the vandalism and was disappointed that locals didn’t take more pride in their park.

Bean there ; done that!

“So today I take my little girl to Chapel Street Park, and this is what I found. Baked beans on the swings, the kids roundabout and on the basket ball area,” the mum wrote.

“I don’t understand. When we have all been cooped up for a while now, would have thought people would want to look after parks,” she added.

The post rapidly gained momentum, being shared thousands of times across the globe.

Many commenters were unimpressed with the vandalism.

“Nasty bugger! Rather than wasting beans by raining on other people’s parade they could have donated those beans to a food bank. Shows where the culprit’s priorities lie,” wrote one person.

“It’s disgraceful. The litter and broken bottles also. Zero respect, such a shame,” another person said.

Not the best idea in Heinz-site

Others, however, couldn’t ignore the lighter side of the prank.

“Absolutely out of order!! It’s bean a while for most people since they last ventured out to the park, let’s hope that karma ketchups to those doing it!!!” read one cheeky comment.

“What if those beans just wanted to play on the swings? Some people are so inconsiderate!” said another.

“That wasn’t my brightest idea in Heinz sight,” another person added.

“Back in my day we sat on the bean swing and we liked it. Entitled parents these days think their angels are too good for the bean”, quipped another.

“I think people are bean a bit dramatic,” another replied.

“This is actually a work of art, I can’t believe you’re complaining about this.” one commenter joked.

“We will call this beautiful piece of art, farts & crafts. It looks like they’ve bean hard at work, can’t complain.”

Others demanded that the culprit be exposed:

So this may not really be a joking matter, but we must admit, it did give us a few laughs.

How would you react if you noticed this kind of strange vandalism in your local playground? Tell us in the comments below.