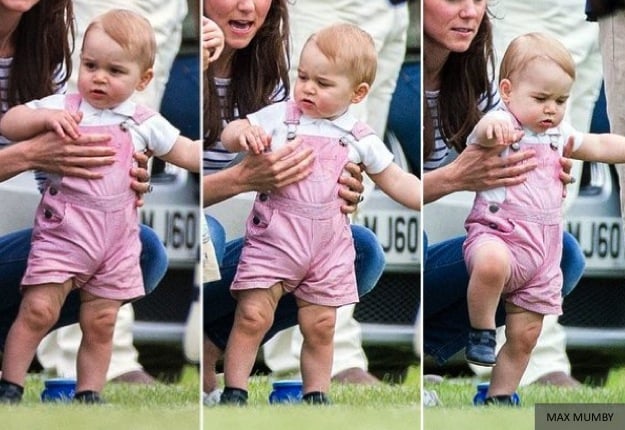 We last saw him on cheering on his dad Prince William at the polo in June with his chubby legs out in shorts, his mum holding him as he took a few wobbly steps.

And now Prince George is off and running!

After Duchess Kate revealed in June that he was walking at 10 months, the little prince is “racing around,” she said at a charity event last week. “He’s so fast and I can’t believe he is opening doors already.”

Most parents will recognise the mixed feelings of elation, pride and “uh-oh” as a little crawler becomes a toddler. Time to be on constant guard!

With George safely at home with his nanny watching for those opened doors and speeding legs, Kate was visiting a school to check in on M-Pact Plus, a project she helped launch last year when she was seven months pregnant.

One of several of Kate’s official charities, M-Pact Plus assists children of families affected by addiction. While at the school, Kate listened intently as she was updated on progress, and asked, “Have you found it difficult to attract parents, given the stigma that can be associated with these issues?”

Outside, she was presented with a Picasso-style portrait of herself and Prince George by 11-year-old Rosie Nee, which she carried around.

Next up for the Duchess: cutting the ribbon to kick off the Tour de France with Prince William and Prince Harry in West Tanfield, England, four days later. But George wasn’t forgotten: he received a personalised mini yellow cycling jersey.

Image courtesy of The Mirror