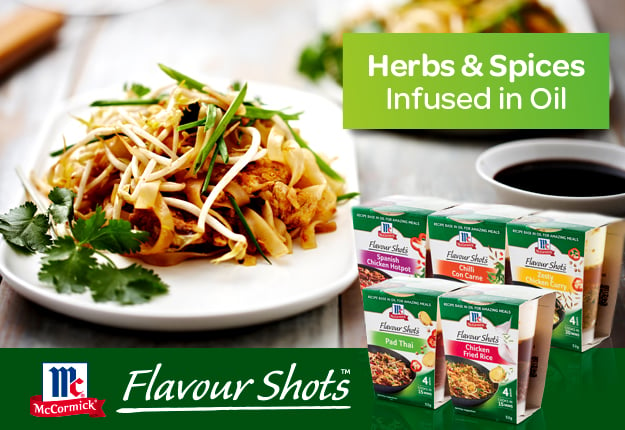 As a busy Mum, it’s hard to come up with interesting meal ideas for every day of the week. But McCormick has solved this problem with their new Flavour Shots range of recipe bases.

McCormick Flavour Shots are single-use little pots of specially selected herbs, spices and seasonings that are infused in Sunflower Oil. They add a real explosion of flavour to anything you cook!

And what’s really great about Flavour Shots – is that you add them to ordinary ingredients you already have in your fridge or pantry – chicken pieces, veggies, canned beans, rice – to create something really special.

Each Flavour Shot gives you the freedom to create all sorts of delicious meals, quickly and easily.

You may have tried recipe bases in the past – but nothing like these. McCormick Flavour Shots really are unique.

Where to find McCormick Flavour Shots

McCormick Flavour Shots are available now. Look for all 5 flavours in the recipe bases section of Woolworths and other major and independant supermarkets. RRP $2.49.

All Mums who are selected for this review are receiving five McCormick Flavour Shots – one of each flavour. We’re asking them to create a different meal with each pack, share it with their family and friends, then post their reviews and ratings on this page.

Applications for the McCormick Flavour Shots product review are now closed. If you missed out this time, don’t worry. There’ll be lots more opportunities for you to join a review team in the future. If you’re not a member of Mouths of Mums join here and then you’ll receive invitations to participate in future reviews.