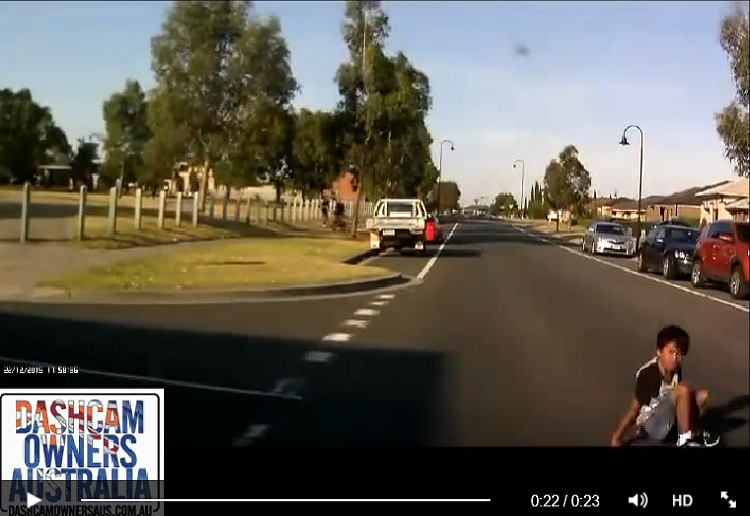 WARNING! This footage shows the moment a child was hit by a car while racing across the road.

Warning. Distressing footage. Luckily he is totally OK though!

The video, posted by Dashcam Owners Australia, was captured yesterday.

The driver wrote: “Please kids don’t run out onto the road, this scared the crap out of us, but thankfully he’s OK.”

The video has been shared over 2300 times and received over 2500 likes.

“I would flog my kids for crossing the road like that!! Lucky it didn’t turn out worse, that driver would have had to live with that for the rest of their lives. Educate your children not to be idiots people. (Flog is an expression of speech in this context, more like a serious yelling at)”

Another person wrote: “They need to show this video to the kid’s parents and hopefully they can educate him on the danger’s of crossing the road if he hasn’t already learnt. The kid was extremely lucky he got off lightly that time ..”

One comment that sparked some backlash read: “For future reference, when you hit a child at that speed you are potentially causing damage internally that you are not aware of. You could be liable for a serious claim to damages in the instance that the child could identify you and / or your vehicle. Secondly, I find it utterly contemptible that you would not stop, immediately exit your vehicle and insist that the child inform you of where his parents could be located so you could contact them and make them aware of the accident. You have no idea the injuries this child may have suffered as a result of your vehicle colliding with him. You are the one driving and (supposedly) a fully licensed ‘adult’. This collision is your fault by law, not the child’s. The fact that he appears to be of indigenous descent will not help your case. Personally, I would have this video removed rather than displaying it like some trophy on social media. You may have a very unfortunate new year. Keep your eyes on the road in front of AND around you. Stop blaming children, whose peripheral vision is still in development, for your incompetence as an adult driver.”

This comment was similar to what I was thinking myself.  I hope he did go and get a check over!

“I hope he was taken to the hospital to get checked out coz it still made a decent impact even though he seems fine. Poor drivers that would give u a hell of a shock.”